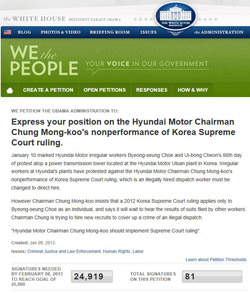 The disgruntled labor union of a subcontractor of Hyundai Motor has posted a petition on the U.S. government’s Web site calling for the Obama administration to put pressure on the Korean automobile giant to rehire temporary workers who have been laid off.

The post was uploaded to the White House’s “We the People” page last Wednesday. The site is a forum for U.S. citizens to create petitions on domestic issues. If a post reaches the 25,000 signature threshold within a month, the government is supposed to reveal its official position on the issue.

The petition is titled “Express your position on the Hyundai Motor Chairman Chung Mong-koo’s nonperformance of Korea Supreme Court ruling [sic].” In it, the labor group, which is composed of mostly non-U.S. citizens, says two workers have been staging a protest atop a power transmission tower at a domestic Hyundai plant for 86 days as of Thursday. They said the protestors are speaking out against Chairman Chung not following a Korean Supreme Court ruling that “an illegally hired dispatch worker must be changed to direct hire [sic].”

In a 2012 suit, the Supreme Court ruled that Hyundai Motor had to rehire one of the protestors, Choe Byeong-seung. The ruling stated the firm “should recognize an in-house, temporary worker who has worked for more than two years as a regular worker.”

The company, however, said the ruling only applies to Choe, and declined to rehire other employees.

“Chairman Chung Mong-koo insists that a 2012 Korea Supreme Court ruling applies only to Byeong-seung Choe as an individual,” the petition reads, “and says it will wait to hear the results of suits filed by other workers.”

As of yesterday at around 7 p.m., the petition had only garnered 170 signatures.

It remains uncertain whether the U.S. administration would offer its opinion on a domestic Korean issue, even if the petition garners enough support. On the site, the administration asks users not to post petitions that “do not address the current or potential actions or policies of the [U.S.] federal government.”

“We assumed that if the U.S. government positively responds to our position, it could enable us to further pressure the [Korean] government and court,” a labor union member told the JoongAng Ilbo on the condition of anonymity.

However, Park Ji-sun, a law professor at Korea University, said, “It’s complete nonsense to call for an answer from the U.S. government, which has totally different labor laws and has no regulations on the management of temporary workers.”