An instructor at a day care in Uijeongbu, Gyeonggi, arrives at work at 8 a.m. and spends the next 10-12 hours supervising, feeding and teaching kids, barely taking a minute to rest.

She and another instructor tend to eight toddlers between 12 and 24 months old.

Kim, 30, is under constant pressure. If she takes her eyes off the babies for one second, they can get hurt.

Parents don’t like it if the day care center workers change often, and as there aren’t any substitute workers, she cannot take breaks or days off. She can’t even take time off to go to the hospital. 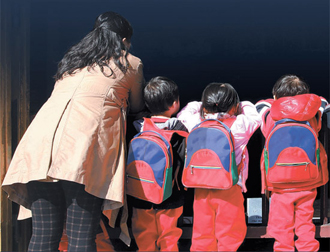 One instructor who had a constant stomach ache finally went to the hospital and found out that she had appendicitis.

“This is considered pretty high because I have six years of experience and I am at the managerial level,” she said. “I only hang on out of a sense of duty, but it’s really hard. I feel no motivation to take care of the kids.”

On Jan. 1, the National Assembly passed a government budget of 3.5 trillion won for the free day care program which expands to all children up to five regardless of household income this year.

The controversial program was first approved in November 2011 and implemented in March 2012 for toddlers under 24 months. Since then, it has come under fire for draining regional and local budgets.

Apprehension continues to mount because while the budget has increased for free day care this year, there is still concern whether it will be enough to accommodate the influx of 3- to 5-year-olds who previously were taken care of at home and will now seek out day care centers.

According to the Ministry of Health and Welfare, the average salary of day care instructor is 1.26 million won. The budget allocated to improve the working conditions for instructors is a mere 105.8 billion won out of 3.5 trillion won for the day care program.

A 34-year-old mother surnamed Yoon from Bangbae-dong, southern Seoul, stated, “There are enough problems with day care centers as is, but I am concerned that with the free day care program the caliber will drop even further.”

She, like other parents, is concerned that as even more parents send their children to day care centers because it is free, it will be more difficult to trust the quality of the over-burdened facilities.

In 2011, there were some 2,992 reported incidents involving children, such as injuries from bumping into things, burns and food poisoning.

One mother of a 5-year-old girl laments, “After my daughter received a burn at her previous day care center, I am looking around but find no solution.”

The conditions of day care facilities are also questionable.

The Ministry of Environment reported last September that out of 1,027 day care centers it examined, 146 exceeded the safe amount of airborne bacteria.

This type of bacteria can cling to dust and water vapor and cause allergies or respiratory problems, it said.

The ministry also reported that a third of day care centers and kindergartens it examined had issues with rotting wood and corroded metal, which could endanger the kids.

Pyo Kab-soo, the Korea Association of Child Care and Education chairman and professor of social welfare at Cheongju University, said in an interview with the JoongAng Ilbo, “In order for parents to be able to trust their children at day care centers, rather than increasing child care benefit rates, the quality of child care instructors has to be increased.

“There is no place in the world that offers a policy of free day care for everybody, and it’s something that can be possible only in a communist society,” said Pyo.