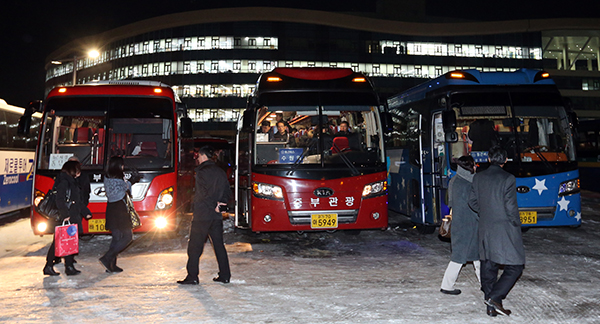 Government employees board buses heading to Seoul at 5:50 p.m. after work yesterday at the Sejong Government Complex, 136 kilometers (84 miles) south of the capital. Those who haven’t found housing in Sejong commute two hours each way. [YONHAP]

Government employees are venting their frustration over the physical toll and inefficiency of working in Sejong City, a month after six government branches moved to the new administrative city some 136 kilometers (84 miles) south of Seoul that was created in an attempt to rebalance regional development.

About 4,000 government employees commute two hours each way to Sejong Government Complex because they have been unable to find adequate housing in the new city, which is still being built.

“My neck and waist are aching because of the four-hour commute, although it’s been only a month since I began commuting to Sejong by bus,” said a 48-year-old employee of the Ministry of Strategy and Finance on his way to the city yesterday.

The government worker, surnamed Park, said he leaves home before 6 a.m. to catch a bus departing at 6:30 a.m. from Yangjae Station, southern Seoul. 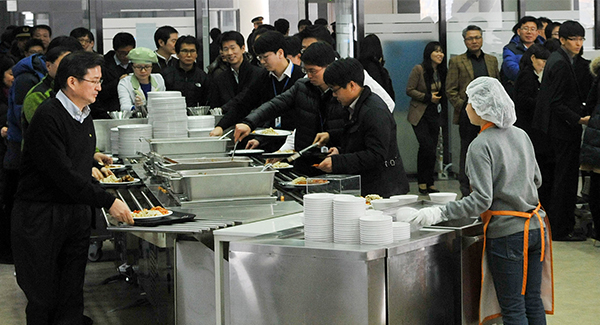 Government officials line up to eat lunch at one of the four cafeterias yesterday at the government complex in Sejong City. By Kim Seong-tae 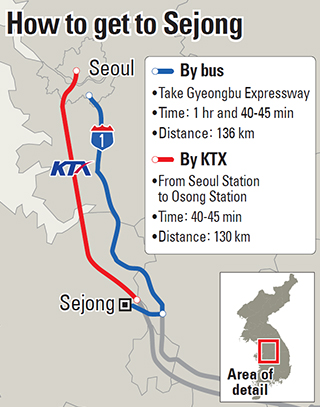 “Because of sleep deprivation, it is hard to concentrate during working hours,” Park said, “and going back to Seoul is another source of stress that affects my work.”

To take the bus back to Seoul, Park said he has to leave the office at 5:50 p.m., which is early for one of the government’s busiest ministries, where working until midnight is not unusual.

A trade union of workers at the central government branches issued a statement last week calling for practical measures to improve working conditions in Sejong. The statement also said those in charge of the Sejong City project should be held accountable for inadequate preparations.

About 5,000 civil servants are working in the new administrative complex, but only about 1,000 have found apartments or studios near their offices.

“Instead of saying ‘Hello,’ we ask ‘How do you commute?’ when we run into our colleagues,” he said. “The next question is, ‘How do you feed yourself?’?”

Currently, there are only four cafeterias in the complex where the civil servants can eat during their noon to 1 p.m. lunch break, and they start lining up at 11 a.m.

“When you come late, there is no food, and there are no restaurants around the government complex,” said a 31-year-old surnamed Kim, standing in a line at one of the canteens.

Kim said he and his coworkers come to the office every morning with shopping bags full of snacks and instant noodles.

Hearing about the lack of food, two or three people from nearby villages began selling homemade gimbap (seaweed rice rolls) in front of the complex each morning.

There are complaints, too, from employees who moved to the city.

A worker surnamed Yoo moved with his family to an apartment in Cheotmaeul, the city’s first residential area, in December. Yoo’s 11-year-old son goes to an elementary school with about 30 students. The bigger problem is his younger son, who used to attend a private kindergarten in Seoul.

“I expected the government-run kindergarten to be fairly good, but it isn’t yet ready to take care of children,” Yoo said. “Qualified teaching staff and educational programs aren’t enough, nor is there enough food for the children.”

He and his wife are so worried about their sons’ education that she is considering going back to Seoul.

Civil servants also report problems with efficiency and productivity on the job. Since ministry heads meet with their counterparts at the Central Government Complex in Gwanghwamun, central Seoul, two to four times a week, they spend a lot less time at their desks in Sejong.

“When managing directors have meetings in the capital, they usually don’t commute to Sejong. Even when they do, they can barely stay at the office due to tight schedules,” Kim said. “Our work is being delayed because reporting is late when the bosses aren’t here.”

Finance Minister Bahk Jae-wan has been criticized for not spending a single night in Sejong for the past one month. Bahk reportedly visits his office in Sejong once a week at most because he attends at least two meetings in the capital every week.

Even though the government plans to introduce video conferencing soon, expectations about improvements in efficiency remain low.

“Inefficiency is taken for granted, because Sejong City is an abnormal form of city that was originally proposed by the former government and then revised by the current government,” said a public administration professor at Sungkyunkwan University, who declined to be named.

A high official at the Fair Trade Commission pointed out that one of most serious problems is severed access to information. “Because government officials are kind of isolated here, there are fewer chances to meet nongovernment people, which shuts off information channels,” he said.

Sejong City was the brainchild of late President Roh Moo-hyun. The Lee Myung-bak administration tried scrapping the plan, saying it would be folly to move most government offices so far from Seoul, but the Assembly, including President-elect Park Geun-hye, shot down the attempt in 2011. Since then, the plan to build a “multifunctional administrative city” named after King Sejong from the Joseon era (1392-1910) has steadily moved forward.

The Prime Minister’s Office was the first to move in November, followed by the Ministry of Strategy and Finance; Ministry for Food, Agriculture, Forestry and Fisheries; the Ministry of Land, Transport and Maritime Affairs; Ministry of Environment; and Fair Trade Commission in December.

President Lee is scheduled to hold the first cabinet meeting in the government complex today. Six other ministries, including the Ministry of Knowledge Economy, are scheduled for relocation by the end of the year. Four more will relocate in 2014. By then, about 11,870 public servants will be working there.