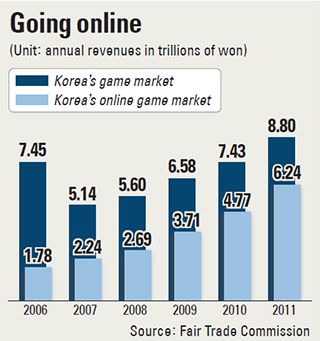 The government wants local game companies to make it harder for teenagers to become addicted to online games.

Underage plays will not be able to sign up for an online game account without permission from a legal guardian.

Also, an adult’s permission will be required when an underage gamer wants to purchase a game item on a Web site. Any transaction made without the consent of an adult can be automatically cancelled.

The number of consumer complaints about underage gamers has risen in recent years.

“With the new standards, we expect fewer complaints and less damage done to consumers,” said the commission in a release.

Lawmakers last week proposed a new 1 percent tax on total revenues of the game companies to give the government money to help rehabilitate game-addicted children.

The proposal submitted by 17 lawmakers also included forbidding the trading of items used in games.

People in the game industry officials were shocked by the proposal. The casino industry is forced to pay 0.35 percent of their total revenues to help addicted gamblers.

“Are we more harmful than a gambling house?” asked an official at a local online game company.

To show their disapproval, companies are considering boycotting a nationwide game event dubbed G-Star this year. G-Star, an annual trade show for the computer and video game industry, is held by the government organization in Busan that supports the industry.

Namgoong Hoon, co-president of Wemade Entertainment, a sponsor of the event last year, encouraged other companies to boycott the event on his Facebook page last week.

“I support the idea 100 percent,” agreed Lee Jung-woong, CEO of Sundaytoz, a developer of the popular game Anipang.