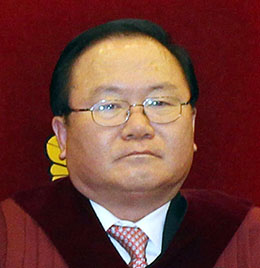 Lawmakers of the Democratic United Party and the Progressive Justice Party yesterday held a press conference and challenged the nomination. The lawmakers, who will grill the 61-year-old former Constitutional Court judge, Lee Dong-heub, in next week’s confirmation hearings, said they have serious doubts about Lee because the job requires higher ethics and qualifications than other senior posts in the government.

The Blue House announced on Jan. 3 that President Lee nominated the conservative, veteran judge to head the Constitutional Court to succeed Lee Kang-kook, whose term ends on Jan. 21. Both spokesmen for the president and President-elect Park Geun-hye said the two leaders had enough consultations before announcing the nomination.

The opposition parties, however, openly vowed to “kill” the nomination. The National Assembly will have confirmation hearings on Jan. 21 and 22 and the 13-member special committee for the hearing is composed of seven ruling Saenuri lawmakers and six opposition lawmakers.

Citing his previous rulings, the DUP criticized the nominee’s political and ideological stances.

The DUP said he was the only justice of the Constitutional Court who ruled as unconstitutional an independent counsel investigation into the investment fraud scandal involving then president-elect Lee Myung-bak.

The DUP also attacked the nominee for having ruled as constitutional a ban on outdoor demonstrations at night and a ban on election campaign activities using the Internet.

The nominee was also criticized over his rulings on some sensitive cases involving the Japanese colonial rule of Korea. He ruled that it was unconstitutional for the government to recover assets of Japanese collaborators.

Representative Park Hong-keun of the DUP said Lee violated the law governing resident registration by using a false address in 1995. Lee purchased an apartment in Jeongsa-dong, Bundang, in June 1995 and filed a resident registration report to the address, but actually lived in his home in Songpa-gu, Seoul, until June 1997.

Park said that was linked to real estate speculation because apartments in Bundang at the time were sold with strict bans on renting. Owners were required to live there and some violators had faced criminal punishments.

Lee admitted that he didn’t live there at first, but left the apartment in Bundang empty and didn’t rent it out. He said he moved into the apartment after his children all went to universities. Lee also said he didn’t evade any tax.

Rumors also spread that Lee, when he served as the head of the Suwon District Court in 2005, ordered judges to consult with Samsung Electronics so that the company would sponsor gifts for the court’s year-end party. Rumors said some judges rejected the order and threatened to boycott the party and Lee withdrew the request.

Lee issued a statement and flatly denied the accusation. “I have never made that order,” he said. “I also have no idea if Samsung ever made a proposal in advance about sponsoring gifts.”

Speculation also grew about the sudden increase of Lee’s savings. In 2007, Lee reported 128.9 million won ($122,012) for his savings and 41.9 million won for his wife’s savings. But the amount went up to a total of 800 million won in savings for the couple last year.

Lee said his family tried to save as much as possible. Condolences as cash gifts provided for his parents’ funerals in 2007 and 2010 and inheritance from his parents, as well as the 120 million won severance pay from his retirement from the Constitutional Court judge post last year also contributed to the increase, he said.

Criticism was also raised about Lee’s ethics. While serving as the Constitutional Court judge from 2006 till 2012, Lee went on nine overseas trips, about three times more frequent than other justices, critics said.

He was also criticized for bringing his wife to a trip to the United States in 2008 and to Europe in 2010.

“A judge goes on an overseas trip about once every two years or less to attend international seminars or at the invitation of other countries,” the Munhwa Ilbo quoted yesterday a Constitutional Court official as saying. “Lee loved going abroad, so he created reasons for those trips.”

Lee said yesterday that the trips were official and that he would further explain about the details at the confirmation hearings.

Outgoing Constitutional Court Chief Justice Lee Kang-kook also expressed concerns about the snowballing controversies surrounding the nominee chosen to succeed his job and said the country needs to make a modification in the system.

He said the country could adopt a system to allow the chief justice of the Constitutional Court to be elected by the court’s judges like Italy, Spain and Russia.

The ruling Saenuri Party continued to defend Lee yesterday. Since the nomination was made through consultation with the president-elect, it would be an embarrassment for Park, even before her presidency begins, if the nomination falls through.