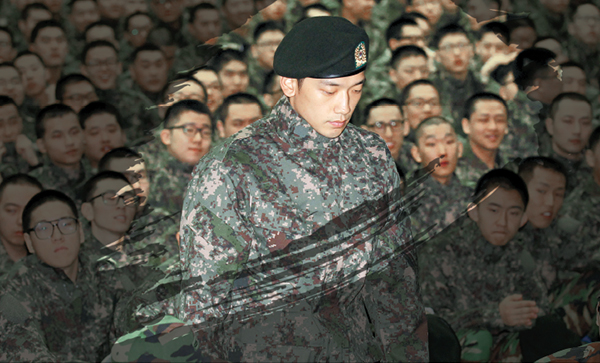 Iconic K-pop star Rain came under fire over a series of paparazzi photos indicating he violated military rules, reflecting how seriously military duty is taken by the public.[JoongAng Ilbo]

On New Year’s Day, paparazzi photos were released showing Rain, whose real name is Jung Ji-hoon, on several dates with actress Kim Tae-hee over the past couple of months, including during the Christmas holidays. Later that day, the management agency of the 33-year-old Kim officially confirmed their relationship.

The announcement was met with a barrage of criticism suggesting that the K-pop icon’s romance bloomed at the expense of his military duty. Rain is halfway through his two years of mandatory service.

In the most recent photographs, the 31-year-old celebrity was caught flouting military guidelines by not wearing a beret. He also was accused of making “private contact” with civilians while on duty, also a violation of military rules.

The official Web site of the Ministry of National Defense was flooded with postings calling for Rain to be disciplined, with thousands of people signing an online petition urging an investigation. 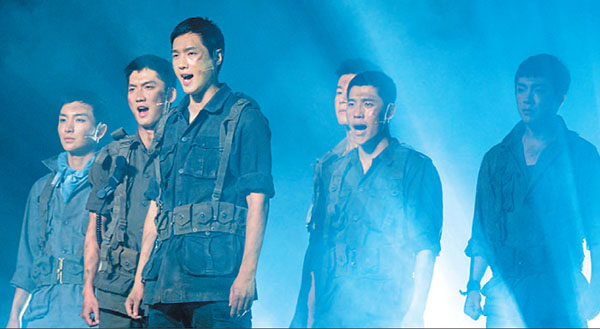 A group of entertainers including Leeteuk (far left), Ji Hyun-woo (center) and Kim Moo-yeol (third from right) performs in the military musical “The Promise.” [NEWSIS]

The Rain backlash is the latest example of Koreans’ sensitivity regarding the country’s mandatory military service. There is little tolerance for soldiers who attempt to use their civilian fame to dodge the draft or receive special treatment after a spate of scandals involving men from wealthy families caught while trying to avoid their national duty, especially at a time of heightened tension with North Korea.

In the world of show business, there is new term - “militarisk” - for the potential image problems that could result from mandatory service. How celebrities conduct themselves in the military can make or break their careers.

“The mood against draft-dodgers and negligence of duty is so hostile that nowadays entertainers feel it’s better to get it over and done with,” says Ha Jae-geun, a pop culture columnist.

Acknowledging the public outcry over the Rain photos, the Defense Ministry was quick to respond. It held a press conference on Jan. 3, a day after the accusations surfaced, with spokesman Kim Min-seok saying, “During his meetings with actress Kim, he had private contacts [with her], which is a violation of service rules. The battalion will take proper measures against him to ensure fairness with other soldiers.”

Last Tuesday, Rain was put on probation and confined to his barracks for seven days after a disciplinary committee decided he violated rules that forbid a soldier from private business while on duty.

But the punishment was not enough to assuage public anger after a series of reports saying he has been granted leave more than 60 times in the past year, almost twice the average for regular soldiers.

Rain serves in a PR division in charge of promoting the Army by en-gaging in various forms of performance, including concerts and plays.

“We formed a special division in 1996 because it is good for both entertainers and military,” says a representative of the Defense Ministry. “Entertainers fear they will lose fame. But if they are serving in the unit, they can still be involved in performances and the Army’s image can benefit.”

Rain’s leaves were legitimate and mainly to rehearse and perform for military events, he says.

Public anger over celebrities trying to manipulate or avoid military duty can be traced to the case of Steve Seungjun Yoo, a Korean-America pop artist, who was arguably the biggest star on the K-pop scene in late 1990s and early 2000s. His good looks, combined with his rigorous, sophisticated choreography and rapping, were a magnet for enthusiastic female fans. He swept numerous music awards.

Top: Moon Hee-jun, who had fallen out of favor for deserting K-pop for rock, won admiration for his military service. Above: Actor Hyun-bin’s popularity got a boost when he volunteered to serve in the Marines, which is known as the toughest branch of the military.[JoongAng Ilbo]

Yoo’s high-flying career crashed and burned in 2002 because he chose to avoid mandatory service.

Yoo repeatedly stated on television that he would serve his “holy duty of national defense.” But in 2002, just before he was to be inducted, the singer, who lived in Southern California until he was 13, became a naturalized U.S. citizen.

Korean society was enraged. The government considered Yoo’s decision an act of desertion and deported him, permanently banning him from the country.

“Since the controversy involving Yoo, the issue of military service has been taken extremely seriously and people have stricter standards toward TV stars,” says pop columnist Moon Han-pyeong. “People think there should be no special treatment or exemption for any group.”

Yoo has been active in China since then, hoping to regain his popularity through different demographics. The singer made his first formal public appearance in 10 years by attending the 2012 Mnet Asian Music Awards in Hong Kong.

“For the past 10 years I went through hardships and painful times that I cannot explain with words, and got to where I am today. I am really hurt,” he said at the awards, adding that he has no plan to resume activity in Korea.

The entertainer was convicted of extracting healthy teeth to evade the draft. He was given a one-year suspended jail term before the Supreme Court acquitted him last May.

Even after the trial clearing him, MC Mong, a frequent guest on TV variety shows, disappeared from the entertainment industry.

Song Seung-heon, a popular actor with a huge following in Japan and other parts of Asia, caused an avalanche of criticism in 2004 after attempting to avoid the military by using falsified medical records. He later joined the Army and has resumed his career, but most agree he is not as popular as he used to be.

But while trying to shirk one’s duty can destroy careers, celebrities who play by the rules can get a big boost from their military service.

Actor Hyun-bin received hero’s welcome last December when the heartthrob was discharged after serving for a year and nine months.

A discharge ceremony at Marine Corps Headquarters in Gyeonggi was attended by thousands of fans and a throng of reporters. Banner-waving fans expressed their admiration by donating about four tons of rice to charity to commemorate his return.

Hyun-bin won the hearts and minds of the public by volunteering for the Marines, known as the military’s toughest branch, rather than serving in the public relations unit reserved for most entertainers, including Rain.

Moon Hee-jun debuted in 1996 as a member of H.O.T., an iconic idol boy band that dominated the K-pop charts in the 1990s and won many awards.

After the group disbanded, however, his career declined as he moved into rock. K-pop fans mocked his love for the genre and criticized him as a fake rocker.

But Moon changed minds by reporting on time to serve in the Army. Some fans, as well as about 50 reporters, waited outside the gates of the Army grounds in 2005 when he enlisted.

Psy also was put to the “military test” before becoming an international phenomenon.

Accused of negligence during his first term of service, Psy regained public favor by willingly serving an exemplary second stint.

“During my 12 years as a singer, I almost had to end my career since people shunned me due to my insincere military service,” he said later. “But finally people gave me their love so I could become what I am today.”

The risk of being perceived as somehow trying to avoid or manipulate military service is so great that the trend these days is for celebrities to publicly declare they will fulfill their duty, even at the peak of their careers.

Actor Yoo Seung-ho, who most recently starred in MBC’s “I Miss You,” says he will enlist next year. He is 20 and has recently gained enormous popularity.

“He has a strong will to fulfill his role as a member of Korea’s youth before being an actor. ‘I Miss You’ will be his last project before his enlistment,” says a representative of Yoo’s agency. “It will be a meaningful project for him, so he will be working even harder.”

Such decisions are not hard to understand. “Nowadays, dodging the military is almost like suicide for entertainers,” says Jeong Deok-hyun, a columnist specializing in pop culture.