Energy not a political issue

Energy not a political issue 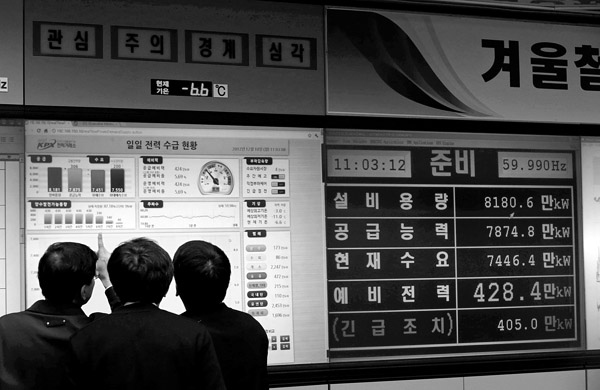 I recently read that college students were asking President-elect Park Geun-hye to not abuse welfare benefits. They were requesting the government not use the money allocated for the benefits. They are concerned about their financial burden in the future which could be caused by excessive welfare promises. A similar situation is already happening in the energy sector.

Nowadays, the electricity supply makes citizens insecure. As a former deputy minister of Knowledge Economy overseeing energy policy, I feel grave responsibility. Electricity has become such an essential part of our life that we can’t imagine living for a moment without it. The government has made all possible efforts to provide affordable and stable electricity. While the fuel cost needed to generate electricity, such as the price of oil, gas and coal, has risen drastically, the government has kept the rate of electricity stable in order to supply power to citizens at a cheap price.

As a result, the Korea Electric Power Corporation (Kepco) is suffering from considerable deficits. It is a common rule in economics that nothing comes for free. A company that suffers constant deficits cannot survive. We cannot let Kepco go bankrupt because of deficits.

Someday, someone must pay the price for using electricity cheaper than the production cost today. Years later, the future generation may have to pay a higher rate for electricity. Or our generation will pay more tax - instead of electricity bills - to offset the deficit.

In 2008, the government provided a subsidy to Kepco for not raising the electricity rate. Out of political motivation to win the support of citizens in the early days of the administration, the Lee Myung-bak administration designated electricity as items under price control and instructed Kepco not to raise the price despite the surge in international oil prices. Instead, the government made up for a part of the deficit.

When a factor that can cause a price increase arises, not to reflect it in price but to subsidize it with taxpayer’s money is one of the worst policy decisions. In underdeveloped countries, the government may provide basic commodities such as electricity and oil at a cheap price to win the support of people and provide subsidies to the industry.

This policy, however, completely ignores the signaling function of price to the market in the market economy. Price not only controls supply and demand but also plays a crucial role in corporate investment decisions. The prices for oil-based products are determined by the market, so their prices rise as the international oil price goes up. But the electricity price is pegged by the government, and electricity - an expensive energy - has become cheaper than oil.

As oil users convert to electric power to take advantage of cheap prices, the electricity demand drastically increased, and the surge of demand was one of the major causes of the alarming blackout on Sept. 15, 2011. The policy ended up only causing greater inconvenience to the citizens than the benefits from cheap electricity price.

The green growth policies promoted by the Lee administration, including the smart grid, have also not had significant results largely because of the excessively low electricity rate. When the electric power price becomes more realistic, reasonable consumer spending and necessary investment on efficient electricity use would naturally follow to prepare a foundation for a full-fledged green growth.

The extra financial burden on low-income families as a result of the electricity price hike can be resolved through additional support, such as issuing coupons. It is truly regrettable that these aspects were ignored and the government uses the cheap electricity price as a justification to win popular support over the short term.

The electricity price policy puts the burden on the future generation, just like excessive welfare benefits. Energy and electricity are the most important parts of our basic infrastructure to maintain the state and lives of the people. Sustainable national development is only possible with a proper energy policy. The next administration should not take a political approach on the energy issue. When it breaks away from political considerations, we will be able to plan the energy policy for the next 100 years.

*The author is a visiting professor at Seoul National University.