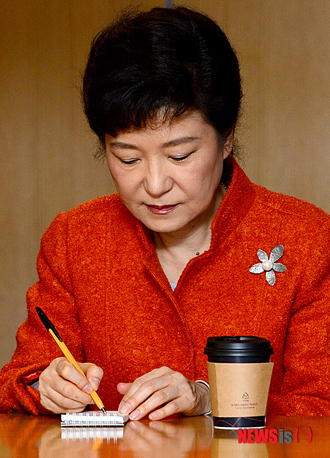 Concerns are rising over the feasibility of some of President-elect Park Geun-hye’s high-cost campaign pledges, including steeper welfare spending, and so are calls to revise some promises downward or ditch them altogether.

Her transition team, however, brushed off the concerns yesterday, saying, “The projects were put together after considering their workability.”


According to Kim Yong-joon, chief of Park’s transition team, at a press briefing yesterday: “It isn’t right to demand that we should not go forward with presidential campaign pledges that have been put together sincerely, or to demand they be discarded by saying the country would be worse off [financially] if all promises are kept.

Kim added that such demands should not come when the new government hasn’t been launched yet and a review of campaign promises is under way.

Kim’s remarks were a response to concerns voiced from political circles the previous day about the cost of Park’s pledges. 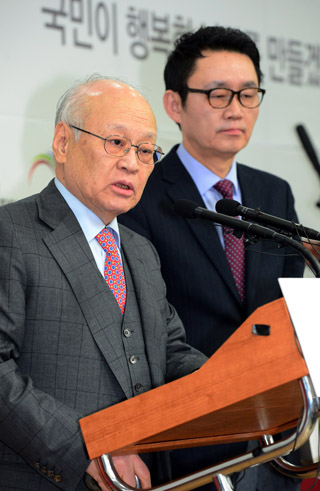 “Whether we talk of the ruling or opposition party, candidates make a pledge to the people that they will do this or do that to win votes ahead of an election,” said Shim Jae-chul, a Supreme Council member of the Saenuri Party, on Wednesday.

“But there should be a confession made to the people if there are realistic problems regarding the pledges’ workability after reviewing the budget.”

Shim specifically cited such promises as providing senior citizens with monthly allowances, reducing the mandatory military service to 18 months, and expanding health insurance to cover all treatments for illnesses such as cancer, heart and cardiovascular diseases. Currently, 75 percent of costs are covered for those illnesses.

During the campaign, Park made several big promises on expanding welfare including monthly allowances for all people over 65 years old of 200,000 won ($189) regardless of their income.

According to the Korea Institute for Health and Social Affairs, 39 trillion won will be needed for such allowances from 2014 to 2017. That is more than double what Park estimated during the campaign.

“Not only is it not right in principal to give Samsung Chairman Lee Kun-hee a senior’s pension when he’s over 65 but also there’s not enough financial resources,” Representative Shim said.

Representative Chung Mong-joon of the ruling Saenuri Party also said Wednesday, “The transition team should not be tied down too much on [keeping] the pledges but should try [to pursue the pledges] with the highest priority first.”

It may be difficult for Park to renege on some of her promises because Park has emphasized a government based on “promise and trust.”

She said in her first meeting with her transition team, “When announcing a pledge, the people who came up with the policy reviewed it over and over [about its feasibility].”

What makes the situation even more difficult is that Park promised not to directly raise tax rates in the campaign.

Instead, she proposed measures to earn more tax revenues by legalizing part of the country’s underground economy, cracking down on tax evaders and making government spending more efficient.

“The population is aging fast,” said Hong Sung-gul, professor of public administration at Kookmin University. “The numbers of elderly people who are eligible to receive the promised monthly allowances and the patients who were promised free medical treatments for the major diseases will skyrocket.

“Even though deep thought was given to the pledges when they were made, the government’s data and expertise on the issues should not be ignored. It’s not too late to rethink the pledges, taking into account the fiscal impact.”