More farmers join the ranks of the wealthy

More farmers join the ranks of the wealthy 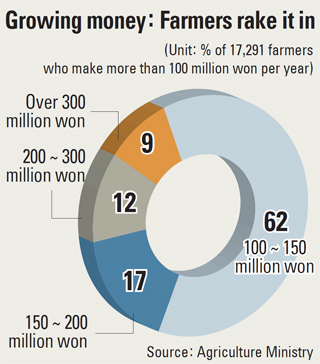 There are a growing number of rich farmers in the country, raising the possibility that agriculture could become the sixth major industry of the country in the future.

According to the Ministry for Food, Agriculture, Forestry and Fisheries yesterday, the number of farmers earning over 100 million won ($93,987) a year was 17,291 in 2012, up 3.3 percent from the year before. The number includes 890 farming companies that earn over 200 million won yearly.

The total number of farmers in the country is 1.16 million. The affluent farmers account for only 0.01 percent of the total.

The growth has continued for four straight years, a sign that Korea is developing a competitive agricultural sector that contributes to overall economic growth, the ministry said in a statement.

The ministry said improved profitability of Korean farmers is attributable to the successful introduction of new technologies and modern systems to process and distribute agricultural products, meeting demands of consumers more successfully.

“By adopting the newest technologies the farmers were able to cut costs significantly,” a spokesman at the ministry said. “Meanwhile, the government found a possibility that improvement of agricultural technology and its application could help the country develop farming as the sixth major industry encompassing production, processing and distribution services in the future.”

Among top earners are several farmers selling products like apples, ginseng and organically-grown items to local consumers but also shipping abroad to the United States. They are competitive enough to find overseas customers now, the ministry said.

Lee Young-choon, who raises bellflowers in Gyeonggi, is a case in point. He uses new technologies to produce various products from the bellflowers and their roots including food, medicines, teas and cosmetics ingredients.

By region, the largest share of rich farmers lived in North Gyeongsang, taking 37 percent of the total. South Jeolla and Gyeonggi followed the lead with 17 percent and 13 percent respectively.

By sector, cattle farmers were the richest, followed by orchid growers, vegetable growers and crop raisers, according to the data.

Over 60 percent of the most wealthy farmers earned between 100 million won and 150 million won. The ministry said 184 of the total earned more than 1 billion won.