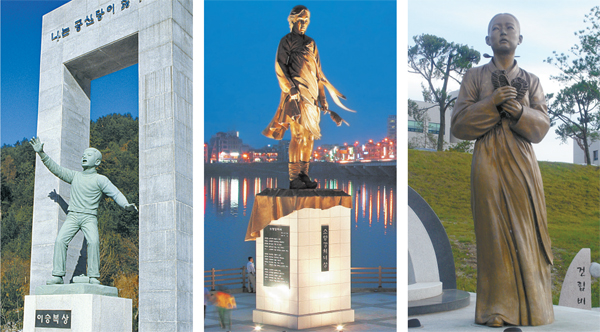 From left: An anti-Communism statue using a boy named Lee Hang-bok, who legend says was slain while screaming, “I hate Communism”; a statue of Soyang River Girl near the river in Chuncheon, Gangwon, the subject of song by the same name; and a statue of Mother of Won in Andong, North Gyeongsang. whose mummified husband was discovered with a heartwarming letter by her. [JoongAng Ilbo]


Kim Ji-ha, a poet and democracy activist, recently made headlines when Seoul Central District Court ruled that his imprisonment in the 1970s was wrong in a retrial requested by Kim.

In 1974, Kim was sentenced to death for instigating a group of students to overthrow the government. He was released 10 months later thanks to international efforts, but he was imprisoned again for six years for writing a story about his first incarceration.

In the play “Copper Yi Sun-shin” that Kim wrote in 1971, Admiral Yi Sun-shin (1545-98) laments to a passing vendor that he “wishes to get out this copper prison,” a reference to the statue of the revered Joseon-era admiral in Gwanghwamun. In the play, the vendor tries to rid Yi of his armor and sword, but gets arrested.

Although statues are not covered by the “Deliberation on the Standard Yeongjeong” policy, some critics denounce Korea’s “statue culture” as nothing more than an imitation of the West.

“Statues in Korea only focus on authoritative and overwhelming outer features, rather than inner qualities,” art researcher Jo Eun-jeong told the daily newspaper Hankyoreh. “Many of them were made in less than a year, and for that reason it’s hard to even evaluate them in terms of their aesthetic beauty.”

Just like portraits, statues in Korea emerged in the 1960s and 1970s under the military regime as a way to reinforce authority and enlighten the public. For that reason, Jo and other experts in art and culture say the statues are little more than cliches created in a short period of time after little or no discussion of how they should look.

The result? They are neither artistically attractive nor historically significant.

“Political forces chose whom to make statues of on their own and put them up anywhere convenient,” wrote Jeon Wu-yong, a researcher at the University of Seoul, in a paper called “Seoul’s Monumental Figures and History of Places.”

Examples include statues of King Sejong in Deoksu Palace (to which he had few ties) and teenage freedom fighter Yu Gwan-sun and respected Silla-era general Kim Yu-shin (595~673) built near Namdaemun but soon after were moved because of tunnel construction.

“It’s not too much to say that Korea has no statues at all that have historical and artistic value, and documentation,” says art critic Yun Beom-mo.