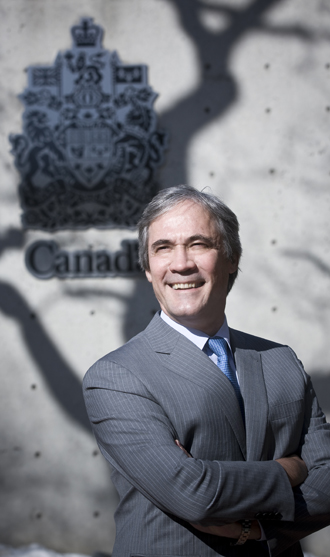 Last Monday, the Embassy of Canada in Jeong-dong, Jung District, central Seoul, heated up as celebrities, including actor Oh Ji-ho and singer G.Na stood in front of the flashing cameras, smiling brightly as honorary ambassadors of the world’s second-largest country.

They were invited by the Canadian Embassy in Seoul as part of an event kicking off a series of celebrations throughout the year to commemorate the 50 years of Seoul-Ottawa diplomatic relations, which was Jan. 14.

“It is my pleasure and honor to celebrate 50 years of Canada-Korea diplomatic relations with such an exciting and diverse range of events, which will be held all year long,” said David Chatterson, Canadian ambassador to Seoul.

Some of the key events in Seoul include recreating a hockey game that was held near the front lines on the frozen Imjin River in 1952 by Canadian soldiers during the Korean War, but this time on an ice rink in front of City Hall in central Seoul next month.

There will also be a special program on KBS2 TV on Canadian cuisine in May or June in partnership with the Canadian Tourism Commission, as well as a Canada Day event in June in cooperation with the Canadian Chamber of Commerce in Korea.

To commemorate the 60th anniversary of the signing of the Korean War Armistice Agreement on July 27, Canadian veterans and their family members will visit sites in Korea, and in July, the renowned circus arts troupe Cirque de Soleil will perform at the Jamsil Stadium in Songpa District, southern Seoul.

“I look forward to seeing our two nations use this opportunity to take our relationship to the next level by strengthening cooperation across the board; in trade, education, energy, global security and international aid and development,” said Ambassador Chatterson.

He said the year 2013 is a milestone, celebration and an opportunity for both countries to “celebrate a long history of friendship and exchange between our two countries.”

Though ties between Korea and Canada officially started in 1963, their relationship goes back more than 100 years.

Canadians, including missionary James Gale and physician Oliver Avison, came to Korea in the late 1800s as missionaries, educators and physicians.

Also, in the 1950s, almost 27,000 Canadian troops, the third largest group after the United States and the United Kingdom, came to defend South Korea during the 1950-53 Korean War and suffered 516 fatalities.

Though the two countries have had diplomatic relations for the past 50 years, the bilateral relationship has suffered from lack of attention.

“Both live in the shadow of powerful neighbors - the U.S., China, Japan and India,” Chatterson said. “Also, few problems mean little attention and there’s a tendency to take each other for granted.”

He added that while Canada is focused on large, rich markets of the U.S. and Europe, there’s a tendency to see Korea as largely focused on domestic development and security.

Nevertheless, there’s unrealized potential, according to the ambassador, as Canada and Korea are both changing.

“We are natural partners on a range of issues including peace and security, nonproliferation, human rights and development and aid,” Chatterson stated.

There have been vibrant people-to-people exchanges between the two countries ever since Koreans began immigrating to Canada in the 1970s and 1980s.

Today, 220,000 people of Korean descent are in Canada, which is the fourth-largest in number after China, the U.S. and Japan, while around 22,000 Canadians in Korea are engaged in various fields of business.

A pending issue for the two countries, meanwhile, remains in signing the Korea-Canada free trade agreement.

“Negotiations progressed well through 13 rounds in 2008 but then reached an impasse [due to autos, beef and pork, the closure of the beef market during the Mad Cow scare and also Korea’s focus on the U.S.].”

According to the ambassador, resumption of beef exports to Korea early last year created positive momentum and Canada and Korea have re-engaged in discussions with a view to resuming full negotiations. The annual trade between Korea and Canada reached $12 billion last year.

However, there are controversies and areas of challenge in the negotiation that need to be pushed through.

“Negotiations are a give-and-take process,” he said. “We need to find an appropriate balance, which can take time. The last issues to be resolved are usually the most sensitive and difficult. Canada’s objective is to conclude in the near term a high-quality agreement that will benefit both Canada and Korea.”