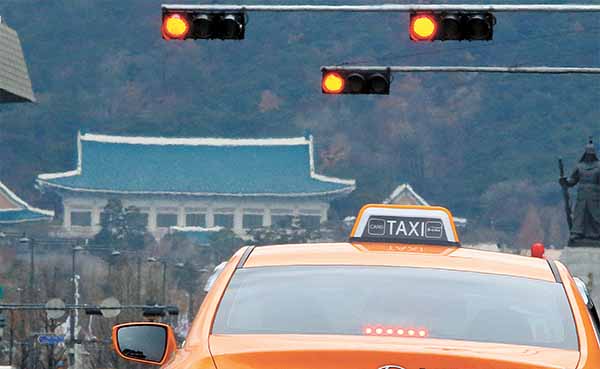 A taxi stops at a red light in central Seoul near the Blue House. President Lee Myung-bak yesterday vetoed the National Assembly’s bill to provide state subsidies to the taxi industry by designating taxis as public transportation. The government said it will come up with an alternative support plan. [YONHAP]

President Lee Myung-bak vetoed a bill for the first time, shooting down government subsidies for the taxi industry amidst concerns about a massive new wave of public spending under the incoming administration of President-elect Park Geun-hye.

But since the bill was supported by both ruling and opposition parties, expectations are high that the legislature will overrule his veto with a two-thirds vote.

Lee upheld a motion passed by his cabinet calling for the legislature to reconsider the bill that designates taxis as mass transportation, which would put them in line for government subsidies.

“There are other ways to normalize the taxi industry than this law,” Lee said, quoted by his spokesman Park Jeong-ha. “It is desirable to take the right direction for the next administration.” 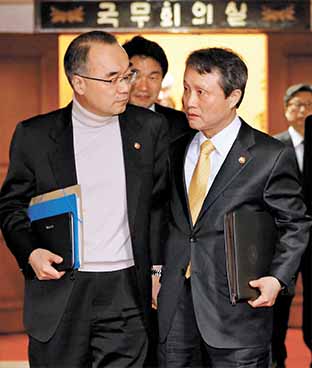 “The so-called taxi law has problems,” Yim Jong-yong, minister of the Prime Minister’s Office, said at a briefing yesterday. “Public transport refers to a vehicle that is capable of transporting masses on a certain route and a schedule. A taxi is an individual vehicle that can’t be included in this category. There is no country anywhere in the world that recognizes taxis as public transportation.”

The new law offers state subsidies of about 1.9 trillion won ($1.78 billion) to cabbies. Facilities and garages for taxis will be designated public facilities, maintained with money from those subsidies.

Based on government statistics, people who ride in taxis account for only 9 percent of people traveling every day, while buses account for 31 percent and the subway and train 23 percent.

“The law will bring a fiscal burden to the central and local governments,” Yim said. “Most subsidies for public transport are being paid by local governments and they are opposed to the bill.”

Both ruling and opposition lawmakers expressed displeasure at the presidential veto.

“The taxi law is aimed at improving the dire working conditions of employees in the taxi industry,” Park Ki-choon, chairman of the main opposition Democratic United Party, said during a party meeting yesterday. “President Lee promised the bill five years ago, and so did President-elect Park Geun-hye. This bill reflects a social consensus through the approval of 222 lawmakers.”

To override a presidential veto, more than half of the 300 incumbent lawmakers must cast ballots and two-thirds should vote for the bill. In the previous voting, 222 seating lawmakers voted in favor of the bill.

Lee Hahn-koo, the floor leader of ruling Saenuri Party, told reporters at a briefing that the veto was “an act of ignoring the legislature.”

However, unlike the DUP, the Saenuri Party is uncertain if the Assembly will override Lee’s veto.

“I think we need to look into the government’s alternative and listen to the opinions of the taxi industry and the DUP,” Lee said.

President-elect Park, who promised during her campaign to improve working conditions for those in the taxi industry but didn’t specifically support the bill, is keeping silent on the issue.

During the presidential campaign, both ruling and opposition politicians supported the bill to sway the votes of 300,000 taxi drivers across the country. They passed the bill on New Year’s Day despite stiff opposition from Lee’s government and bus operators.

Currently, the taxi industry receives about 760 billion won annually in support from the central and local governments for increasing oil prices and taxes. But they say they have suffered losses since 2004, when then-Seoul Mayor Lee Myung-bak started a new public transportation fare system.