Disney’s wish is for an ‘Aladdin’ blockbuster on Broadway

Disney’s wish is for an ‘Aladdin’ blockbuster on Broadway 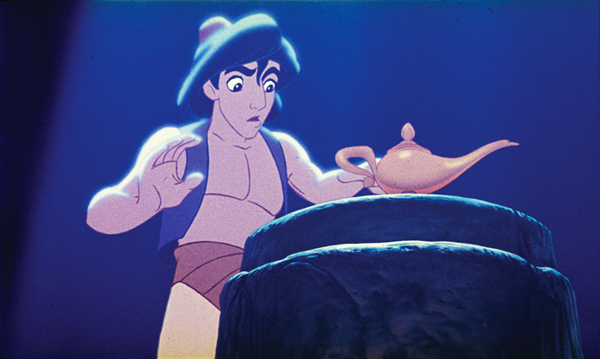 A stage musical of “Aladdin” is riding a magic carpet to Broadway and the president of Disney Theatrical Productions promises it will be “a full-length, big song musical with big dance numbers.” [AP/YONHAP]


NEW YORK- A stage musical of the animated film “Aladdin’’ is riding a magic carpet to Broadway and the president of Disney Theatrical Productions promises it will be “a full-length, big song musical with big dance numbers.’’

Thomas Schumacher said the final two-act “Aladdin’’ will build on the 1992 film blockbuster with new songs by Alan Menken, additional characters and, appropriately, some magic tricks.

“If I look around Broadway right now, what I want to see is big production numbers. I want to see lush environments. I want surprise,’’ Schumacher said last week. “You want a lot of humor, which we will do. And you want heart.’’

“Aladdin’’ will be directed and choreographed by Tony Award-winner Casey Nicholaw, whose previous hits include “The Book of Mormon’’ and “The Drowsy Chaperone.’’ Bob Crowley, who has a Tony for “Mary Poppins,’’ will design the sets, and Chad Beguelin has written the story and some lyrics.

The musical will begin with a nine-week run at Toronto’s Ed Mirvish Theatre starting in November with an eye toward moving to Broadway’s New Amsterdam Theatre in 2014. “Mary Poppins,’’ currently playing in the 1,797-seat theatre, will end its six-year run in March.

The animated version of “Aladdin’’ starred Robin Williams as the voice of the big blue genie and earned $500 million worldwide. The film score was created by Menken and Howard Ashman, with additional lyrics provided by Tim Rice after Ashman’s death. Menken won the 1992 Oscar for best original musical score and the film’s hit song, “A Whole New World,’’ won a Grammy and Oscar.

Finding out how to make the genie come to life onstage was one of the biggest obstacles facing its creators. The answer for Disney was to take him from a shape-shifting blue spirit to a Cab Calloway-styled vaudevillian.

“I do feel pretty confident in what we’ve done with the genie,’’ said Schumacher. “When you buy a ticket and sit down in a theater, you want the live experience, not a film recreated.’’

He also explained why Disney decided to close “Mary Poppins’’ even though it has been among the top 10 grossing shows for the past six years and top five for attendance: Its profitability will not last too much longer.

Disney has 10 projects in development, including musicals made based on “The Hunchback of Notre-Dame,’’ “Dumbo,’’ “Father of the Bride’’ and “Freaky Friday,’’ and a play adaptation of “Shakespeare in Love.’’ On top of that, Disney has recently created a new version of “The Little Mermaid’’ for Moscow and a Spanish-language “Mary Poppins’’ for Mexico.