Youth see plastic surgery as one path to success

Youth see plastic surgery as one path to success 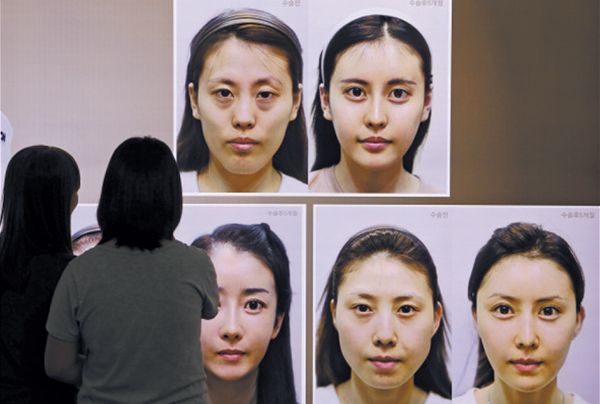 
It was a snowy day last week when the Korea JoongAng Daily visited M Plastic Surgery clinic in Myeong-dong, central Seoul. Elbowing through the busy crowd, the reporters were able to finally arrive at their destination. Once they entered the facility, they were led to a corner where people sat to receive counseling. According to the counselor, people who wish to have double-eyelid surgery are the majority, followed by people who wish to do epicanthoplasty or lateral canthoplasty.

The M clinic specializes in double-eyelid surgery, nose surgery, transplantation of fat and more. As stated by the consultant, the main age group of those who receive cosmetic surgery at the clinic are people in their 20s and 30s, but a considerable number of teenagers, and even kids under the age of 10, grab appointments in a quest to become more beautiful.

During the vacation season in Korea, it is not unusual to see students enter plastic surgery clinics with their parents. Because students desire to show an improved appearance to their classmates once they are back in school, a significant number of them decide to get plastic surgery. In fact, at a high school in Apgujeong, southern Seoul, 13 out of 32 students in a single class had double-eyelid surgery done during the winter vacation right after they graduated from middle school.

A desire for wider eyes led 18-year old Kim to make the final decision to go to the operating table. But there was a reason why she turned to plastic surgery other than seeking beauty. She had partly wished for surgery because of some physical issues. She had experienced difficulty in opening her eyes with ease ever since she could remember. Prior to her transformation, Kim had to move her forehead along with her eyelids in order to open her eyes properly. To fix this, she decided to have her eyes done along with double-eyelid surgery for approximately $1900.

Several polls have shown that teenagers’ thoughts on plastic surgery are gradually changing. According to Seoul Survey (2011), 54 percent of female and 42.5 percent of male middle to high school students said that plastic surgery is acceptable as a means to improve one’s appearance - a 6.1 percent and 9.6 percent increase compared to 2007.

Yoo, also an 18-year-old who received double-eyelid, epicanthoplasty and eye surgery, showed signs of contentment regarding her choice. The cost for her eyes was roughly $2800, which Yoo found to be rather cheap compared to the satisfaction it ultimately led to. What she wanted to achieve from the surgery was very similar to Kim’s objectives. Yoo wished for larger eyes and wanted to free herself from her heavy eyelids, which made it hard for her to keep her eyes wide open.

The statistics collected indicate that students in their teens go to clinics to have their eyes and noses done. Cosmetic surgery related to eyes costs approximately 1.5 million won ($1,415), while nose surgery is around 3 million won. As stated by numerous clinics in various areas such as Myeong-dong, Apgujeong-dong and Samseong-dong, people who are not yet of age are generally inclined to have surgery done during school vacation due to the swelling that follows. There are several factors that contribute to the decisions of these youths, and the wish to upgrade their looks in order to leave good first impressions is one of them. It is a general belief that a better appearance will help increase the probability succeeding in college or job interviews.

A 33-year old counselor currently working at a high school in Apgujeong, surnamed Seo, shared her opinion on the matter. According to her, Korea’s appearance-oriented society is the root of the skyrocketing number of teenagers deciding on plastic surgery. The perception that the competitiveness of an individual also includes looks makes people believe surgery will be beneficial.

“There are ups and downs regarding teenage plastic surgery,” Seo said.

She explained that an advantage cosmetic surgery may bring teens is the acquisition of self-confidence. Completely changing one’s face allows a person to be rid of complexes that may have existed from a young age.

On the other hand, the drawback of plastic surgery is that it may lead more and more people to think that looks are everything, she added.