Tougher times ahead for twentysomethings

Tougher times ahead for twentysomethings 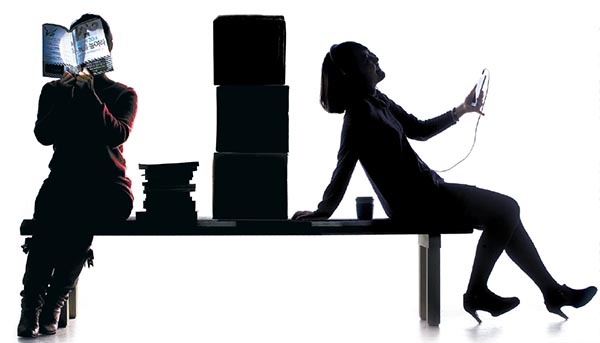 Kim Kyeong-ho, 29, is in permanent job-hunting mode. During the week, he attends additional classes, workshops to improve his resume and interview skills and networks online. He signs up for job fairs, volunteers to help people with disabilities on weekends - that looks good on the resume - and fits in job-searching on the Internet in between.

Kim graduated from a Seoul university with a major in marketing, received a master’s degree in Beijing and is fluent in Mandarin and proficient in English.

“The entry-level job is most important,” says Kim. “Some people tell me, ‘Just lower your standards and take any job that will accept you - you’re not in a position to be picky anymore.’ But if I do that, I might waste several years without advancing my career, and then it will be even harder for me to get into the right field a couple of years down the road.”

Unfortunately for Kim, marketing is a popular field these days. He gets interviews sometimes. He has never passed a second round.

Many Koreans in their 20s and early 30s are stuck in a similar rut: waiting for a first professional break that simply may never come. They worked hard to get into college and graduate with good grades. Now all they want is a starting chance in a solid job.

But too many of their classmates want exactly the same thing. Not all are going to succeed.

Already, there’s a large slice of Korea’s younger generation seeing their professional, middle-class dream slip away, along with dreams built on the foundation of a good stable career, such as getting married, buying a house and having a family. They’re weighed down by college loans, unsure whether they’ll ever get out of their parents’ house. And many are losing hope.

Park Min-young, 29, graduated from a rural education college and tried to find a permanent teaching job but failed. She thought she should study more to work toward that dream, but didn’t have the money.

“My family’s situation was not great, so I gave into my parents’ pressure to give up studying further and find work as a temporary teacher,” she says. Every December, when her temporary teaching contract runs out, she wishes she had persevered. She’s losing faith in her dream.

“I have a lot of regrets,” Park says.

Hwang In-yeong is trying her best to find a good job in the finance industry. “I sometimes feel like my permanent job is ‘employment preparation,’” she admits. In the two years since she graduated from college, she has retaken the TOEIC to boost her speaking scores, received Associate Financial Planner Korea certification, a license to provide professional services related to financial planning, and participated in volunteer activities. Her resume looks good, but she’s losing hope too.

“It feels like landing an entry-level position is getting more difficult now because of my age.” Hwang is 28.

The simple fact is there are far too many qualified college graduates in Korea for the kind of good, permanent jobs available.

According to Job Korea, an employment consultant firm, the number of entry-level positions for college graduates at 194 large corporations this year will be around 18,950. By and large, those are the kind of jobs most Korean graduates desire.

The number was a 7.5 percent decrease from last year’s 20,500, a reflection of the economic slowdown in Korea. 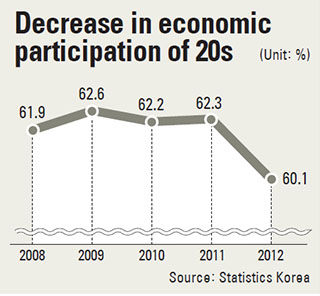 But Korea graduated around 300,000 young men and women from college last year, which is expected to surge to over 500,000 by 2015, according to the Ministry of Employment and Labor.

The stats show that young people aren’t getting berths in the Korean economy.

Last month, economic participation for Koreans in their 20s was 60.1 percent, lower than at the end of 2008, the start of global the financial crisis, when it was 61.9 percent, according to Statistics Korea. This was the lowest figure for the age group since 1986’s 59.6 percent.

There are over 7.7 million people in their 20s. The youth unemployment rate, including people from ages 15-29, was 7.5 percent at the end of last year, according to Statistics Korea, more than double the national average of under 3 percent.

The employment rate for Korean women with college degrees, 60.1 percent, was the lowest out of all Organization for Economic Co-operation and Development countries, according to a joint survey by the OECD and the Korean Women’s Development Institute. Korea likewise had the highest number of temporary female workers, the survey said, accounting for 27.7 percent of all women workers.

While traditionally the youth generation is the backbone of economic activity, the current generation of young Koreans are different from their predecessors. They have better educations, higher aspirations and have no intention of working on the farm or in factories like their predecessors.

In the case of Korea’s baby boom generation - people born in the aftermath of the Korean War from 1955-63 - only 12.5 percent went to college. That figure for the current generation is 75.6 percent. For today’s modern 20-something, a four-year college degree and English proficiency is a given.

Those college educations were major investments in both time - which kept them out of the workforce for years - and money.

The average student’s enrollment in university was five years and 10 months.

The average Korean male, in addition to nearly six years in college, has two years of mandatory military service to perform. On average, the Korean male spends another two years in employment preparation, mainly taking courses and getting training certificates.

In terms of money, a significant amount of the tuition paid by Koreans is borrowed. Job Korea conducted a survey of 774 students from the class that graduated in February 2012. Of the graduates surveyed, 68 percent said that they had student loans to pay off. The average amount was 13.8 million won, an increase of 2.9 percent from the class of 2011.

And 85 percent of these graduates blamed their debt on “college tuition.” The average monthly wages of people in their 20s and 30s is 1.89 million won.

Based on this wage, and setting aside 500,000 won for basic living expenses each month, it will take graduates at least two years to pay off college debts. Saving is not an option.

The Korea Student Aid Foundation, which manages national scholarships and student loan programs, said that university graduates had average loans of 13.53 million won in 2012 compared to 10.97 million won in 2011.

But paying off loans is hard for young people who don’t get stable jobs in corporations. According to Statistics Korea, a third of those employed in their late 20s and early 30s were non-regular workers last year. These workers receive around 61 percent of the pay that regular workers receive.


Giving up on a family

If they can’t repay their debt or save, marriage isn’t possible for many Koreans. Custom says you marry when you’re able to afford your own home.

“When I contemplate marriage, I realize I have no savings for the wedding let alone a house,” said Kim Hyung-min, a 32-year-old office employee who’s been on the job for three years. “And I get nervous thinking that I will be retired before my kid starts college.”

He added, “My friends joke that I should decide to ‘give up one’ (having a child or children) or ‘give up two’ (marriage and kids).”

“Even if I save a million won each month, at the end of the year, that’s 12 million won, and after ten years of savings, that’s still not enough to pay for jeonse (a large, lump-sum deposit for rent) on a place in Seoul,” said Park Min-sun, 31, who is in her second year of employment. “I think the happier path is to enjoy my life right now.” Park has made the conscious decision to invest in herself, splurging on monthly ski trips, a fancy camera and bicycle and enjoying leisure activities.

Park and many of her peers think that to marry they need at least 100 million won in savings. They won’t be able to accumulate that until their late 30s.

“And if we have a kid that late,” she says, “the prospect is gloomy about how to manage paying the child’s college tuition.”

“People in theirs 20s and 30s have a high propensity to consume, and their consumption rate is higher than their wage increase rate,” said Lee Eun-mi, a senior researcher at the Samsung Economic Research Institute. “They are very different from those in their 50s and 60s, who sharply reduced spending in times of hardship.”

Retirement will be long

Korea is a rapidly aging society and the young working generation of today is going to end up supporting the elderly, who are living longer than ever before. In a vicious cycle, as marriages and births are delayed, fewer babies are born to make up for the aging Koreans. When today’s young eventually get old, there will be fewer young Koreans to help support them.

If the current generation in their 20s and 30s retire after 30 years and try to live on pensions and savings, there won’t be enough to support them,” said Lee Myeong-jin, sociology professor at Korea University. “A ‘silver industry’ has to be developed and a new society planned where people can work from their 30s to 70, for forty years.

“Our labor environment is not yet ready to meet the era of 100-year-old Koreans. As employment for people in their 20s has become delayed, we need to transform into a society that can work until old age.”

Korea’s average retirement age is under 57 years old, and life expectancy is over 80 years. The math is simple: People are expected to work for 30 years to prepare for 20 to 40 years after retirement.

The amount people in their 20s or 30s will need to have saved to retire is 770 million won, according to Samsung Life Retirement Research Center.

Those who retire now need on average around 380 million won,

The National Assembly’s Budget Office estimates that pension eligibilities should be delayed to 67 years from the current 61.

“It is important for young people to cut down on needless spending and save up even a tiny bit of money from early on,” said Choi Eun-ah, a researcher with Samsung Life. “Gone are the days when you can hit the jackpot through real estate or stock investments. Instead of unreasonable investments, stick to a paradigm of installment savings or paying pension insurance.”