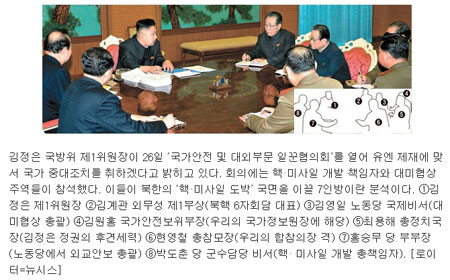 North Korea once again warned it would take “effective, high-profile measures” in protest of the UN-approved expanded sanctions, fueling speculation of an imminent nuclear weapons test.

In the report, the state media said Kim presented a stern decision to take “effective, high-profile state measures” and “assigned specific tasks” to officials who are in charge of the sectors.

The KCNA said the measures were sparked by the new sanctions unanimously passed by the Security Council to include more North Korean entities and individuals on travel bans and asset freezes. The media didn’t elaborate on the “highly-intensive measures” and “specific tasks.”

At the meeting for the committee, a string of high-ranking officials attended, the KCNA said, including Choe Ryong-hae, director of the General Political Bureau of the Korean People’s Army; Hyon Yong-chol, chief of the general staff of the army; Kim Won-hong, the minister of state security; Pak To-chun, a party secretary in charge of the war industry; Kim Yong-il, a party secretary of international affairs; and Kim Kye-gwan, vice minister of foreign affairs.

A photo released by the KCNA shows the meeting as a Western-style roundtable talk, led by Kim Jong-un, who was seated at the head. In it he is talking with Vice Foreign Minister Kim, known as a veteran in charge of nuclear affairs and diplomacy toward Washington. It is the first time that the reclusive regime announced such a high-level security meeting ahead of a nuclear test.

North Korea has issued a package of warnings every day since the UNSC members, including its closest ally China, backed the Resolution 2087 against the regime in response to its defiant launch of a long-range ballistic rocket in December 2012.

On the day when the UNSC unanimously approved the new resolution, the North’s Foreign Ministry immediately said in a statement that there would be “no more dialogue on denuclearization” and vowed to “take physical action” in response, hinting at a third nuclear test.

A day later, North Korea increased its rhetoric, issuing a statement in the name of the powerful decision-making body National Defense Commission, saying it will carry out “a higher-level nuclear weapons test” and an “all-out war” against Washington, whom they blamed for leading the sanctions.

On Friday, Pyongyang renewed its threat again, through a statement carried by the Committee for the Peaceful Reunification of the Fatherland, a propaganda mouthpiece, that threatened Seoul with “physical countermeasures” if it takes a direct role in the new sanctions.

A commentary by the ruling Workers’ Party’s newspaper Rodong Sinmun on Saturday also said “a nuclear test is the demand of the people.”

Many political observers believe North Korea is preparing for its third nuclear test, following the first in 2006 and second in 2009.

A U.S. research institute said on Friday it analyzed satellite images of the suspected nuclear site in Punggye-ri, in the northeast region of the country, and found North Korea appears to be almost ready for an underground test.