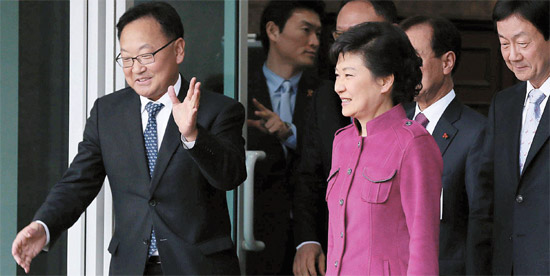 The presidential transition team has decided to fund the controversial proposal for an expansion of welfare subsidies for elderly people with tax money instead of drawing on the coffers of the National Pension Service, starting next year.

On Friday, at the state affairs debate session on the economy hosted by the presidential transition team, President-elect Park Geun-hye said that while the basic old-age subsidies need to be realized, the funding should not be taken from the National Pension Service, but instead come from taxes.

The transition team initially proposed to fund an expansion of the senior welfare subsidies to all elderly people over 65 by drawing 30 percent of funds from the National Pension Service.

The National Pension Service is a fund paid into by salaried workers and helps fund their retirements after the age of 61, while the basic old-age subsidy is paid by government funds.

The transition team, in keeping with Park’s pledge, proposed that senior subsidies will be based on income, with the poorest seniors receiving double the current amount, while more affluent seniors will receive no less than 97,100 won, all of it funded with government tax money.

Financing this program over the next four years is expected to cost over 40 trillion won, according to independent analysts, much higher than the Saenuri Party estimates of 14 trillion won. But a viable solution to how that amount will be raised has not yet been proposed.

Welfare has been a central part of Park’s high-cost presidential campaign pledges. She added that the senior subsidies should be the “groundwork and with the addition of income-based pensions, enable people’s livelihood in old age.”