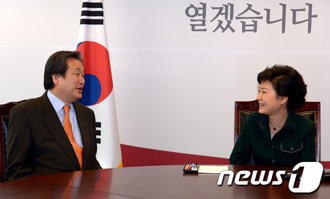 China’s remarks on the rising tension in Northeast Asia, which sees Pyongyang standing firm on its nuclear weapon ambitions, were heard as Cho gave a briefing on the results of a Beijing trip made by a group of special envoys Park sent last week.

Cho quoted from a direct statement by Xi Jinping yesterday during a briefing held at the presidential transition team’s office in Samcheong-dong, central Seoul.

From Jan. 22 to 24, a delegation led by President-elect Park’s close aide Kim Moo-sung, the former Saenuri Party lawmaker, was in Beijing to meet with China’s incoming leader Xi.

The delegation, which also included Representatives Shim Yoon-joe and Cho Won-jin of the ruling party and Han Seok-hee, professor of international studies at Yonsei University, was the first group of envoys sent by the president-elect since her presidential victory on Dec. 19.

The visit also came amid rising tensions on the Korean Peninsula with North Korea responding strongly to the sanctions the United Nations Security Council (UNSC) imposed last week against the communist regime for its multi-stage rocket launch in December.

According to Cho, the message from Xi was given in response to the delegation’s request that “China play an important role in leading North Korea to make the right choice.”

Pyongyang, under its young leader Kim Jong-un, has said it will give up its denuclearization efforts, raising speculation that the North’s third nuclear test is imminent.

The role of China, North Korea’s closest ally, has been considered crucial in persuading the regime to join denuclearization efforts.

Ever since North Korea’s rocket launch on Dec. 12, UNSC members, including the United States and South Korea, had made extensive diplomatic efforts to persuade Beijing, a veto-wielding permanent member of the top international body, to agree on imposing tougher sanctions on Pyongyang.

China backed Resolution 2087, which pressures the North, and which was adopted unanimously last week. Park’s transition team has also, in a rare move, strongly urged North Korea not to go forward with measures that make matters worse, like a third nuclear test.

“Xi Jinping thinks highly of the president-elect’s trust-based diplomacy efforts and he hopes bilateral relations will move forward by establishing a trust-based relationship between the leaders,” Cho said.

The spokeswoman also said that a high-level government official will be sent to Park’s inauguration ceremony scheduled for Feb. 25.