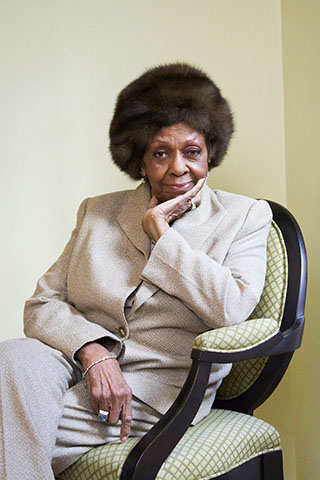 NEW YORK - Cissy Houston has a few words, and a few more, for Bobby Brown.

In “Remembering Whitney,’’ the mother of the late Whitney Houston writes that from the start she had doubted whether Brown was right for her daughter. And she thinks that Whitney might not have ended up so “deep’’ into drugs had they not stayed together.

“I do believe her life would have turned out differently,’’ Houston writes. “It would have been easier for her to get sober and stay sober. Instead she was with someone who, like her, wanted to party. To me, he never seemed to be a help to her in the way she needed.’’

“Remembering Whitney’’ came out yesterday, two weeks short of the first anniversary of Houston’s death. She drowned in a hotel bathtub in Beverly Hills, California, at age 48. Authorities said her death was complicated by cocaine use and heart disease.

During a recent telephone interview, Houston said she has no contact with Brown and didn’t see any reason to, not even concerning her granddaughter, Bobbi Kristina. She reaffirmed her comments in the book that Whitney Houston would have been better off without him. “How would you like it if he had anything to do with your daughter?’’ she asked.

A request to Brown’s publicist for comment was not immediately returned Monday.

Houston said she wanted the book published so the world would not believe the worst about her daughter. Cissy Houston, herself an accomplished soul and gospel singer who has performed with Elvis Presley and Aretha Franklin, describes Whitney as a transcendent talent and vivacious and generous person known affectionately by her childhood nickname, “Nippy.’’ But she acknowledges in the book that her daughter could be “mean” and “difficult” and questions at times how well she knew her.

“In my darkest moments, I wonder whether Nippy loved me,’’ she writes. “She always told me she did. But you know, she didn’t call me much. She didn’t come see me as much as I hoped she would.”

Brown is portrayed as childish and impulsive, hot tempered and jealous of his wife’s success. Cissy Houston describes a 1997 incident when Whitney sustained a “deep cut” on her face while on a yacht with Brown in the Mediterranean. Whitney insisted it was an accident; Brown had slammed his hand on a table, breaking a plate. A piece of china flew up and hit Whitney, requiring surgery to cover any possible scar. AP