When Kim Ye-ji, 29, heard “The Phantom of the Opera” was going to be here an additional month, she wasted no time going online to buy tickets. So she was shocked to find out that nearly all seats had been sold.

Seol & Company initially planned a two-month run through January. However, when 90 percent of tickets were sold before the first performance, organizers extended the show to Feb. 28.

“When I heard it was going to be extended, I quickly went online and began clicking for Feb. 1 to get two VIP tickets,” says Kim. “I finally got seats for Feb. 20.”

In response to such persistent demand, the show’s run has been extended again - through March 24. Last week, “Phantom” surpassed 1 million total viewers for its four runs in Korea - two original productions in English and two licensed shows in Korean.

Such numbers might lead one to believe that Koreans are crazy for musicals. And while that may be true for hit productions from abroad, it’s a different story for creative musicals written and produced in Korea.

Experts point out that Korea’s musical history goes back only about a decade and insist that the production level is finally on track.

According to Interpark Theater, the country’s largest online ticketing service, there was a 25 percent increase in musical ticket sales last year compared to 2011. About 5 million people purchased at least one musical ticket in 2012, 20 percent more than the previous year. Moreover, according to research by the Korea Culture and Tourism Institute, the country’s musical industry grew from revenue of about 3 billion won ($2.8 million) in early 2000 to 270 billion to 280 billion won last year. It expects the figure to surpass 300 billion in 2013.

However, not all musicals shared in that success, with industry experts saying creative productions “fell behind original and licensed musicals.”

Creative musicals have long been criticized of their lack of literary value and low-levels of execution and artistic presentation. In the early years of the industry, such problems were understood by theatergoers to be the result of inadequate financing and a shallow pool of talent. And despite some improvement, audiences generally are still not satisfied.

“Creative musicals lagged behind last year compared to licensed musicals, and the success of those musicals depended on who was in the cast,” says Kim Yang-seon, head of the Interpark Theater.

Meanwhile, Korean productions of licensed musicals were in their heyday in 2012.

Many of the Korean-produced musicals are also a big hit in Japan, creating a K-musical boom. Creative musicals such as “Thrill Me,” “Goong,” “Jack the Ripper,” “Run to You,” and “Gwanghwamun Sonata” have been staging in Japan. However, critics attribute their success to the popularity of idol stars, rather than the quality and content of the musicals themselves.

Many production companies speak about the need to produce creative musicals with quality content rather than depending on licensed musicals.

According to the Korea Musical Theater Association, among the 100 creative musicals each year, only about 10 can be considered “successful.”

“Thanks to the establishment of large theaters, such as the Blue Square in Hannam-dong, the number of musicals that get staged has increased, resulting in increased demand as well,” says Park Jin-seong, an association official. “However, no statistical data has been compiled to prove that. There are only separate sales figures for individual production companies and nothing is integrated. We are still in the growth phase.”

Park said that the association is talking to the Ministry of Culture, Sports and Tourism about establishing an Integrated Computer Network to provide comprehensive data.

According to producers, the key to developing the country’s musical industry is to produce “qualitative creative musicals rather than relying heavily on licensed musicals,” as the royalties and paychecks for famous actors and actresses are increasing day by day. Musical producers say the royalties they pay to stage licensed musicals account for at least 20 percent of the total production cost. Moreover, they voiced concern over the small pool of musical actors and actresses in Korea that leads to reliance on K-pop or movie stars to sell tickets.

“This is why musical producers in the country should make efforts to produce qualitative creative musicals so we can export our work abroad,” said Song Seung-hwan, head of the PMC Production and a veteran actor, during a press conference for the company’s new creative musical “Arsene Lupin,” which is set to premiere next month.

And there is a consensus among those in the business that creative musicals are the key to developing Korea’s musical industry. By depending on foreign licensed musicals, they say, Korea will never be able to create added value or grow big enough to export our content.

In an attempt to change that, production companies have rolled up their sleeves in a determined effort to create content that appeals not only to locals, but to international theatergoers’ as well. 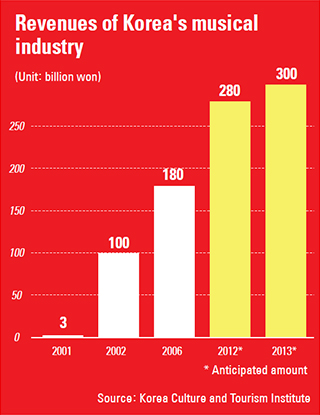 PMC Production, which has a success with a non-verbal comedy show, “Nanta,” also known as “Cookin’ Nanta,” says it has created a musical that is thoroughly designed from the business perspective.

“As a producer, I always have had a desire to take creative musicals abroad,” says Song, adding that’s why “the company chose a work of detective fiction, ‘Arsene Lupin,’ by French writer Maurice Leblanc, as the motif for its global project and worked its way up.”

“Creative musicals we’ve produced so far, such as ‘Daejanggeum,’ and ‘Dalguna,’ were very author-oriented, which means that the musical was created in the way the author wanted it to be. That somehow decreased the positive responses from the audience,” he says. “However, ‘Arsene Lupin’ has been designed thoroughly from the initial stage of production so that it appeals not only to the Koreans but also to the global audience. We have studied and researched how to take the creative musical abroad, and that’s how we produced ‘Arsene Lupin.’

“Korean culture recently has been more popular than other cultures’ in their own countries. K-pop is one of them and certainly Korean soap operas, which started off the whole Hallyu boom, and also Korean movies. However, it is distressing to witness Korean theatergoers still preferring original or licensed musicals over creative ones despite growing musical industry of their own country.”

According to Song, PMC Production has been searching for material for a musical that would appeal to a global audience rather than sticking to the tradition of allowing the author to choose according to his or her preferences. And to Song, the famous detective novel “Arsene Lupin” seemed like it was just the thing.

Lee Jong-seok, director of “Arsene Lupin,” hopes the musical will be the “starting point for Korean creative musicals going abroad as well as a case study that shows creative musicals have the potential to develop not only at home, but abroad.”

“The number of musicals that get staged in Korea is higher than the number on Broadway, which exemplifies Korea’s competence to produce musicals,” says Lee. “However, it is pitiful to see that musicals in Korea get stereotyped by theatergoers as a ‘creative’ or a ‘licensed’ [show], not to mention original.” He adds that his hope is for “Arsene Lupin” and other creative musicals to be up to the level where audiences won’t be able to tell whether it is creative or licensed.

To help support Korean creative musicals this year, the government opened its wallet and decided to allocate 3 billion won from the Creative Musical Production Development Project. Meanwhile, Chungmu Arts Center announced last week that it is going to stage a creative musical production of “Frankenstein” based on a novel penned by English writer Mary Shelley and a film of the same name.