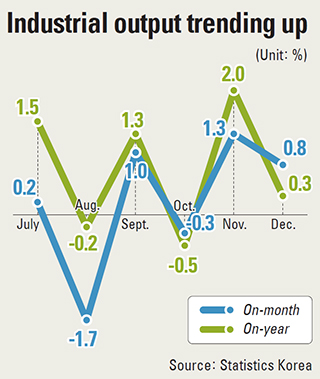 Along with improving economic indicators in the U.S. and China, Korea’s overall industrial activity fared better last month to spur optimism about signs of a nascent recovery amid lingering global uncertainty.

According to data released by Statistics Korea and the Ministry of Strategy and Finance yesterday, total industrial production grew 0.8 percent in December from the previous month and was up 0.3 from a year earlier. However, both figures grew at a weaker pace than in November.

This index is considered crucial to estimating the country’s GDP.

Production in the mining, manufacturing, electricity and gas industries expanded 1.0 percent in December on-month and 0.8 percent on-year. The index continued growing for the fourth straight month, even though monthly growth was modest.

The manufacturing industry, accounting for 94 percent of this sector, led the expansion as its output grew 1.4 percent from the previous month.

Retail sales dipped 1.1 percent in December from a month earlier, because of the cold spells. However, the figure grew 1.5 percent compared a year earlier.

“Compared to November, consumers spent less, because they refused to go out due to the cold weather,” said Lee Hyoung-il, a director at the Economic Policy Bureau. “The cold weather was a temporary factor.”

It turned out that people bought winter jackets and other items in November, a month earlier than they planned, as the temperature fell below zero degrees Celsius (32 degrees Fahrenheit) far earlier than expected.

“Facility investments remained too low throughout the year, and the index is still bad,” Lee said. “Although the number surged significantly from the previous month, we can’t say whether it is actually improving or not.”

These output figures came along with improving economic indicators of the United States and China. The U.S. jobless index plunged to a five-year low in December, while new housing constructions hit a new high in four years and six months.

The Chinese economy grew 7.9 percent in the fourth quarter last year, rebounding for the first time in two years.

“Because the Korean economy responds to external conditions immediately due to its export-oriented structure, such favorable signs in the world’s two largest economies did have some impact on the latest industrial activity,” Lee said.