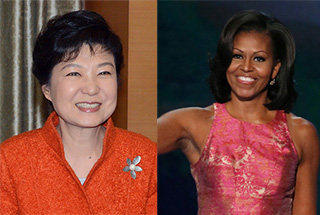 On February 9, 2011, First Lady Michelle Obama made an appearance on NBC’s Today Show. She showed her sense of fashion with a navy-and-white polka dot dress and a red belt. The next morning, American media was stirred. The dress Michelle Obama wore on the national morning television program was 35 dollars from H&M.

Moreover, Michelle Obama, disguised in a hat and sunglasses, was photographed while shopping at Target undercover. At the second inauguration ceremony last week, she wore a belt, shoes and gloves from J. Crew. Widely considered the most fashionable First Lady since Jackie Kennedy, her down-to-earth style impressed the general public.

Unlike Jackie Kennedy, who preferred European luxury brands, Michelle Obama often wears outfits by up-and-coming designers in New York. The navy coat she had worn at the inauguration ceremony was designed by Thom Browne, inspired by menswear necktie. She once again chose a gown by Jason Wu, a Taiwanese-Canadian designer, whose design she wore at the first inaugural ceremony.

Her other choices of designers include Cuban American Isabel Toledo, Narciso Rodriguez, Thai-American Thakoon Panichgul, Indian-born Nain-Khan and Korean-American Doori Chung. They all have different backgrounds, but they are graduates of Parsons The New School for Design in New York. They were most based in New York, but Michelle Obama’s appearances in their outfits made them internationally famous.

South Korea’s President-elect Park Geun-hye may wish to make fashion statements just as Michelle Obama has done with her impressive style. She maintains a formula of an up-do that reminds of her mother, Yuk Young-soo, pant suits and a pit. Her decades-old fashion reflects her adherence to principles and self-control. However, unlike Michelle Obama, she has made it a strict secret what brands she wears.

She may have wanted to avoid unnecessary attention on her fashion when she was an opposition politician. As the president, however, her fashion has a different meaning. She will be the face of the country, and her fashion will get international attention.

It would be hard to find a better means of promotion and advertisement to spread Korean fashion. It would be thrilling to see a female president wearing accessories, shoes, bags and outfits by young Korean designers and brands at meetings with foreign heads of states. I am already curious what Park will be wearing on her inaugural ceremony.

The author is the New York correspondent of the JoongAng Ilbo.