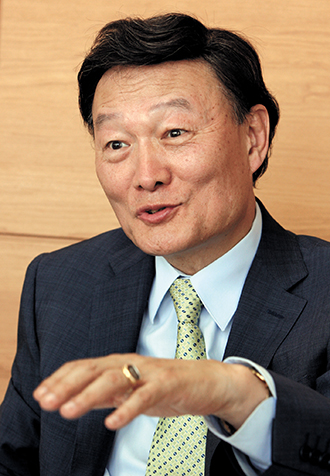 Nowadays, countries all over the world are busy competing to raise their brand power. From hosting investors to tourists, the perceived likability and credibility of a nation plays a big role along with its economic environment.

On Jan. 22, 2009, under the control of President Lee Myung-bak, the Presidential Council on Nation Branding (PCNB) was established in a bid to enhance the image of Korea. Although critics said its establishment is a little late compared to other countries, the council still plays an important role.

Samuel Koo, who became the third president of the PCNB last October, says the council’s job is to connect high-profile companies like Samsung and individuals like Psy and Kim Yu-na to Korea to improve and communicate the nation’s brand.

Many consider the 71-year-old Koo to be the right man for job.

An alumnus of Korea University and Columbia University, Koo worked as a journalist in 1960s for the Associated Press in New York and was one of the news agency’s European correspondents for more than 20 years.

Koo became the first Korean at United Nations headquarters in 1993, taking top posts in public affairs and other outreach activities.

He also worked as the UN representative in Japan for the United Nations International Children’s Emergency Fund (Unicef).

In Korea, he served as the ambassador for cultural cooperation at the Ministry of Foreign Affairs and Trade in 2008. Later, he headed Arirang TV, an English-language station, and then the Seoul Tourism Organization.

Koo, who is married to world-class cellist Chung Myung-hwa, says the role of PCNB is becoming more important as countries all over the world fiercely compete for dollars from tourists and investors.

“Our national brand is keeping pace with the speed of our economic development,” Koo says. “Like the United Kingdom was able to combine the image of the Beatles, the London tour bus and its financial center, we need a control tower that can manage our nation brand.”

Koo says the government’s effort to improve the nation’s brand began during the Kim Dae-jung administration with the phrase “Dynamic Korea.”

Koo points out that the “Gangnam Style” phenomenon has certainly helped to raise Korea’s profile, but it doesn’t necessarily guarantee that the nation’s brand will benefit.

“What’s meaningful about Psy is that he opened another window to Korea,” he says.

While the impact of Hallyu (Korean Wave) is raising worldwide awareness of Korea, Koo emphasizes that the PCNB has been focused on preventing anti-Korea sentiment around the world in line with the goal of trying to make it possible for young Koreans to compete in a global marketplace free of discrimination toward them.

With President-elect Park Geun-hye, government reform has become a hot issue and changing the President Council is currently under discussion. Koo argues the task of branding Korea is too large and important to be the responsibility of just one ministry.

“You need to see the overall picture, but if a certain ministry takes the job, the meaning of nation branding gets washed out as it will be involved with certain parties related with the ministry,” he says. “But whatever the [government reform] result will be, there has to be someone who can carry the role of improving our nation’s brand.”