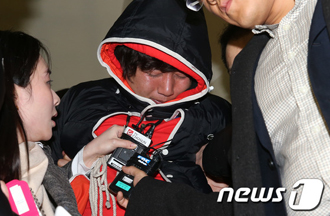 Kang Ji-sun, a 30-year-old suspect who ran away barefoot from a police station while being questioned for breaking into a car in Jeonju, North Jeolla, was caught in Seoul yesterday, ending a five-day run that once again embarrassed the police.

The escapee, who was convicted of theft six times prior to his latest incident Monday, burst through the front door of the Hyoja Police Station in Jeonju with no shoes on after slipping out of his handcuffs at around 7:00 a.m. Monday.

He was caught near Gangbuk District Office in northern Seoul at around 12:20 a.m. yesterday, despite the police’s claims that Kang could not have fled the Jeolla region due to intense police search efforts there.

Concerns over the police’s ability to locate suspects on the run are likely to rise again as it is discovered Kang was never stopped for police inspection during his five-day run.

Despite intense police search efforts involving 1,000 policemen, Kang got on a bus bound for Seoul with around 200,000 won ($183) in his pocket.

He spent all of his money and made calls to his girlfriend using a payphone, which is how police tracked him down.