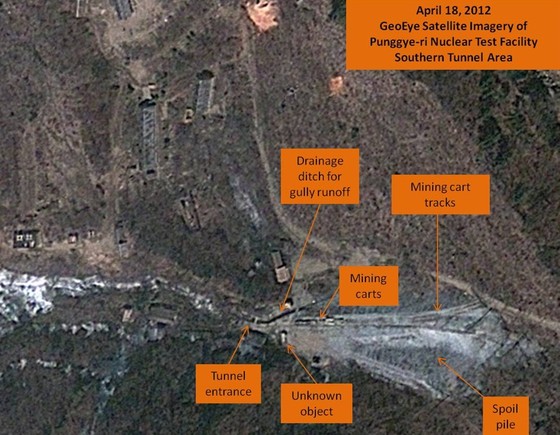 
Increased activity has been spotted at a tunnel of North Korea's main underground nuclear site, a government source here said Saturday, the latest indication the communist state is preparing to conduct a third test.

"At a tunnel in the southern part of the test site in Punggye-ri, we've found that work presumed to be part of preparations for a nuclear test has entered its final stage," said a government source in Seoul on condition of anonymity.

It is the most recent in a series of signs that the North may be preparing for another nuclear test. The communist country has threatened to detonate a nuclear device in retaliation for the U.N. Security Council's passage of a resolution condemning its Dec. 12 long-range rocket launch. On Friday, sources here said the North has put a cover over the entrance to the test site's western tunnel in what has been interpreted as an attempt to thwart monitoring efforts to spot the detonation.

"The North may conduct the test at either the western or southern tunnels. But the activities spotted near the southern one could be aimed at distracting us from the more likely place of the western tunnel, so we are monitoring closely," the source added.

The Punggye-ri site in the North's northeastern tip has three known tunnel entrances and multiple support buildings. The site is where the test is considered most likely, according to government officials and experts, as Pyongyang conducted the previous two rounds of tests in 2006 and 2009 there.