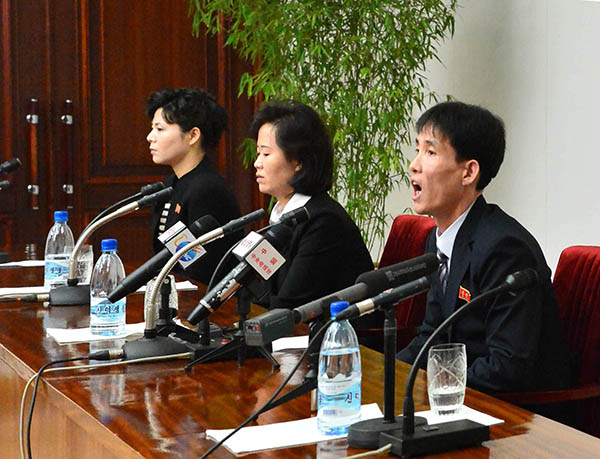 
After a series of defectors from North Korea were found to have returned to the communist state and a spy agent disguised as a defector was recently arrested, the government’s management of these refugees has been called into question.

The North’s official Korean Central News Agency reported on Jan. 24 that four North Korean defectors returned to the North and convened a joint press conference denouncing the dire living conditions in the South.

“I didn’t feel attached to anything in the cold reality of the South,” said Ko Kyong-hui. The woman said she was “dragged” to the South in June 2011 but returned to her homeland at the end of last year.

“Labeled as a so-called defector, I couldn’t get a job anywhere in the South.”

The other three defectors - a couple, Kim Kwang-ho and Kim Ok-sil, and their 10-month-old daughter - also attended a press meeting with more than 30 North Korean officials in attendance. They said they defected to the South in 2009 but returned to the North at the end of 2012.

“South Korea is a really dirty world,” Kim Kwang-ho, the husband, said. “We couldn’t live in such a violent world filled with fraud, threats, and devious plots anymore.”

So far, the regime has held five such press conferences for a total of eight “double defectors.” Four of the conferences have taken place since young leader Kim Jong-un took power.

Park In-sook, a 71-year-old North Korean woman, was the first double defector under the leadership of Kim Jong-un. She used a different name, Pak Jong-suk, at a press conference held on June 29, 2012, saying she returned to the regime in May because of the dire living conditions in the South.

In July 2012, Chon Yong-chol, 53, also appeared at a press conference. He said he was ordered by the South Korean chief spy agency to destroy a statue of Kim Il Sung, the North Korean founder, along the border with China, but was arrested by Northern security guards.

In November, a couple named Kim Kwang-hyok and Ko Jong-nam also held a press meeting and said they felt “disappointment” about their lives in the South.

Perplexed by defectors who have gone back to the North, Kim Hyung-suk, spokesman for the Ministry of Unification, the chief government organization in charge of supporting North Korean defectors and helping them adjust in the South, said at a briefing on Jan. 25 that they regret the defectors’ going back to the North.

These defectors are risking imprisonment or even death by returning to the North. Some defectors leave their families behind, and some sources say the regime has threatened to imprison or kill their children if they don’t return. Basically, the South Korean government believes those press meetings were all set up for the communist regime’s anti-South propaganda activities.

The number of North Korean refugees escaping into the South has been constantly rising, reaching up to about 24,000 in total as of now.

The exact number of defectors returning to North Korea is not released by the South Korean government, but it has been estimated that it will reportedly reach 100 as of last year.

The actual reason why they went back is not confirmed, Kim said at a briefing. However, he said all of the eight defectors returned not entirely voluntarily but were forced by some reasons.

“It seems they were forced to return and not voluntarily,” Kim said. “We have some clues that lead us to think so.”

Park Sang-hak, a North Korean defector-turned-activist, said he was a hometown friend of Ko’s, the defector who said she was dragged to the South at the press meeting, and that she seemed to have been abducted and taken to the North.

“I confirmed that she visited a border region in China and North Korea to get her children and bring them to the South,” Park said. “She told her friends that she would come back soon, leaving her residential apartment. And there, I guess she was abducted by North Korean security guards in China.”

A Unification Ministry also said, “There have been some cases where a North Korean spy agent approaches a defector by making a phone call secretly to abduct him or her.”

Another South Korean government official also said the couple above filed a lawsuit against a broker, who helped them defect into the South, because the broker demanded too much money. But they lost the lawsuit, which apparently made them feel disappointed in South Korea.

Along with the double defectors, the government also faced concerns about potential North Korean spy agents disguised as defectors.

On Jan. 21, the Seoul Metropolitan Government said the National Intelligence Service arrested a 33-year-old man surnamed Yu on Jan. 11 on suspicion of giving Pyongyang information on some 10,000 fellow defectors living in Seoul.

Yu worked for the city government, and was supposed to be a North Korean defector who came to the South via China in 2004.

However, it turns out he is a Han Chinese with Chinese nationality who is suspected of cooperating with Pyongyang.

The government couldn’t figure out his nationality through interrogation, and he received state subsidies as a defector and even worked for the Seoul city government in charge of dealing with 10,000 fellow defectors living in the capital.

Although he was arrested, the news raised concerns that information on 10,000 defectors in Seoul are possibly in the hands of Pyongyang.

Technically, when a North Korean defector comes to the South, he or she is sent to an interrogation center by the National Intelligence Service, South’s chief spy agency. If the interrogators judge the defector is not a spy agent, they send him or her to the Hanawon, a state-run resettlement center in Anseong, Gyeonggi, to educate defectors on how to adjust in the country for 12 weeks.

Defectors say protection of their personal information is crucial for their safety, because the regime considers them as traitors who betrayed the communist state.

In September 2011, a North Korean spy agent disguised as a defector attempted to assassinate Park Sang-hak, a defector-turned-activist renowned for sending balloons into the North carrying anti-Pyongyang messages.

Arrested by the NIS, the assassin reportedly had a list of names of defectors whom he was ordered to murder with a poisoned needle and a gun.

According to the NIS, they have arrested a total of 132 fake North Korean defectors, including 11 espionage agents disguised as defectors over the past five years.

“Given my sources in the North, the regime is quite aware of the personal information of many defectors to the South,” Park, the defector, said.

“They are smuggling the information via their own spy agents, disguised as defectors, or kidnapping North Koreans who have defected and are found along the border area.”

The Unification Ministry said most defectors returned to the North via China, and it is difficult for authorities to deal with all of the defectors traveling there. The disguised spy agent also traveled to China frequently, the NIS said, possibly to communicate with Pyongyang.

However, the ministry said there is no way to monitor all defectors who travel to China.

“Technically, they should have reported to us before they returned to the regime, but they didn’t,” Kim, the Unification Ministry spokesman, told the Korea JoongAng Daily.

“We can figure out whether defectors are in China, but we can’t monitor every detail of what they are doing there. We can’t figure out the exact number of double defectors, because they just illegally cross the border rivers, the Tumen or Yalu, by themselves.”

Defectors are concerned that those double defectors and defector-turned-agents could cause them to have a negative image.

“We fear the regime is stirring up prejudice against defectors in the South with those press meetings,” Park said.