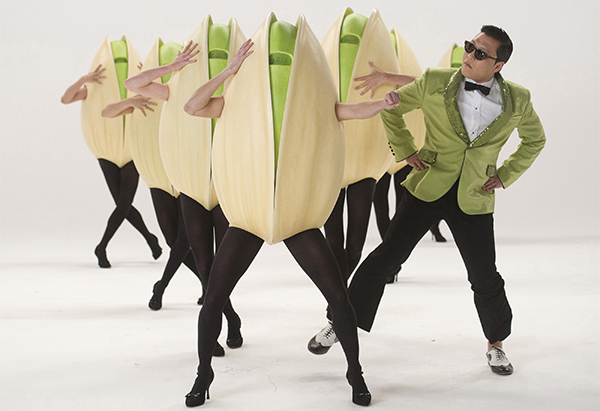 
The world just can’t get enough of Psy. Possibly the least likely of all the Hallyu stars before the advent of “Gangname Style”recently was featured in a commercial for Wonderful Pistachios that aired during the Super Bowl bout between the San Francisco 49ers and the Baltimore Ravens. The 30-second video shows Psy dressed in pistachio green and singing “crackin’ Gangnam Style.”

The half-minute commercial slots during the game cost about $4 million. The Super Bowl is seen in about 200 countries and by 100 million viewers each year.

Since its first airing, the ad has surfaced online through the nut company’s Web site and YouTube channel. With one nut cracked in the U.S. advertising industry, Psy will soon make his way to Southeast Asia and South America. The 35-year-old rapper has been invited to perform at a spring and New Year festivals in Malaysia organized by its ruling party Barisan Nasional.

The show will take place in Penang on Monday and is expected to attract some 60,000 people.

The “Gangnam Style” star will also be at Carnival later this week in Brazil.