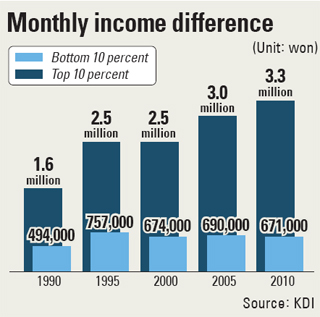 Korea rose from the ashes of war to become one of the world’s economic success stories, but in the shadow of that success is a widening disparity between the rich and poor.

Studies show income inequality increased significantly between 1992 and 2009 and that the social safety net for low-income people need major improvement.

The forum was on Korea’s social policy challenges, which has become a major issue for the incoming administration in light of the country’s rapidly aging population.

Choi noted that between 1995 and 2010, the real income of the lower 10 percent was static while that of the upper 10 percent surged by more than 30 percent.

While acknowledging the importance of income disparity, OECD economist Randall Jones said another pressing problem is the exceptionally high poverty rate among the elderly in Korea compared to the OECD average.

Other problems discussed were the large wage gaps between regular and nonregular workers, low productivity in services and a high level of private spending on education and health care.

Jones argued that one of Korea’s biggest problems is its low level of social spending, less than 10 percent of its GDP compared to the OECD average of 22 percent. Only Mexico spends less.

Angel Gurria, OECD secretary general, said President-elect Park Geun-hye is right to emphasize social policies, adding that Korea is should prioritize the integration of all segments of society as after going through industrialization and democratization. Doing so, he said, would go a long way toward helping the country achieve sustainable growth.

Gurria encouraged Korea to expand its social welfare spending gradually to the OECD average, citing a demographic shift toward an older population. By 2050, Korea will have the second-oldest population among OECD member countries.

At the same forum Vice Finance Minister Shin Jae-yoon stressed that the nation’s economic growth potential should not be compromised by social integration policies and expansion of the social safety net.

The policy makers since last year have been fending off what was considered as a populist movement in the political community that has been demanding wider welfare programs, including free child care and reduced tuition and fees at colleges.

Stressing that strong growth will result in powerful social cohesion, the vice minister said it is essential to establish a virtuous cycle of growth and welfare.

Shin also stressed the need for efficient spending on welfare.

“With society aging quickly, welfare spending will become more burdensome,” Shin said. “It is crucial that constant monitoring and rationalization is practiced [in welfare spending].”