Just divorced and already back on the market

Just divorced and already back on the market 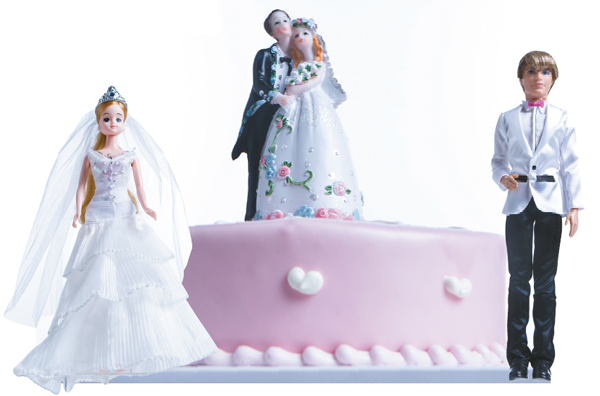 Feelings of failure and rejection used to come hand in hand with divorce - but no more.

With the average divorce rate hovering around 40 percent, or 1.2 million divorcees each year, there is less stigma about the decision to split up.

Divorcees aren’t only more confident in their own judgement; they’re also quicker to jump back into the dating scene.

A woman surnamed Kim, 31, just ended her two-year marriage, and she’s already turned to an online community to find her next relationship. 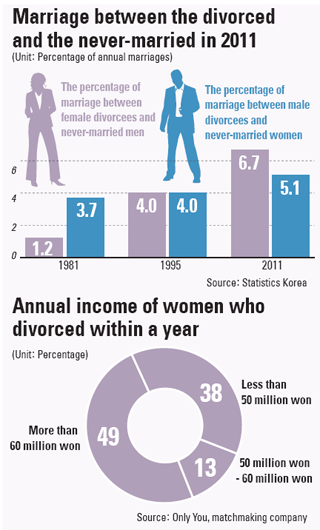 “I have become single again after a failed marriage last year. I think I have become a better mom and things are going well at work. Nice to meet you all,” she said casually in her online profile. “I find consolation and peace of mind while communicating with other divorcees and attend a social group for divorced women.”

Kim’s tale reflects the growing appeal of online forums where the divorced find comfort among their own. In the past, their dating process was rather secretive, but now it takes place in open forums.

And the online groups are only growing. In 2011, 114,300 couples separated according to Statistics Korea, which means 313 couples broke up each day.

Even celebrities, who are often held to high social standards, no longer keep low profiles after separating and even bring up their post-divorce lives during talk show appearances.

For instance, comedian Kim Kuk-jin has become known for using his divorce as a source of humor, while entertainer Cho Hye-ryeon has openly discussed her breakup on a series of TV shows.

As society grows more accepting of divorce, the recently married have also shown a greater tendency to quickly split up, with an increasing number deciding to do so just months or a couple years after the wedding day.

A 35-year-old woman surnamed Ju decided to break it off with her husband after a two-year marriage. As a graduate of a top-notch university, her yearly income amounts to 70 million won ($64,400) and Ju said she has suffered no stigma while dating. She now has a boyfriend.

“I didn’t register my marriage and never gave birth. I only held a wedding ceremony. What’s wrong with that?” she asked.

The so-called comeback of the divorcees has shifted the norms in the matchmaking business.

The previously married are growing in popularity thanks to the perception that they are more understanding and financially stable.

Wealthy male divorcees, in particular, garner a lot of interest from well-off women in their late 30s and early 40s searching for men who are similar in age.

Han Jeong-eun, 31, is one such woman who just doesn’t really care that much about past relationships. She married a divorcee last year after 20 arranged blind dates.

“I couldn’t meet my ‘Mr. Right’ for so long, but my husband was exactly the one that I’ve always dreamed of. His appearance and gentle manner especially appealed to me,” she said. “This is my first marriage, but I don’t care that it’s remarriage to him.”

Son Dong-gyu, who runs a dating company for divorcees, offers testament to the attention paid to the “reborn,” the informal name given to eligible male divorcees.

“In the past, male divorcees were definitely shunned. But nowadays, many women say that they are more embracing and have good financial records,” he said.

“In particular, women in their 30s and 40s wants to meet divorcees.”

The same goes for divorced women because men think that female divorcees are not as picky as young women who have never been married.

“Women who have never been married have high standards for their future spouses, but divorcees have lower expectations,” said a manager at a matchmaking company who wished to remain anonymous.

Jeong Hyun-wook, 41, who has been on dates with both divorcees and single women, says that he believes the divorced are more flexible.

“Some of the single women first asked me how much money I earn. I really didn’t like their attitudes,” he said.

There is even a man who is only interested in a divorced woman.

“I know some divorcees, and they are all good people and laid-back,” said a 42-year-old architect.