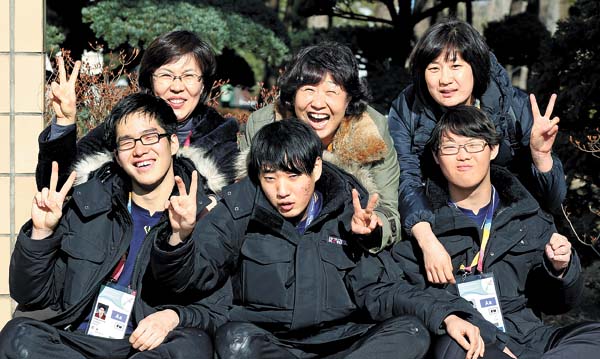 Mothers and their sons who played on the national floor hockey team for the 2013 Special Olympics World Winter Games in Pyeongchang, Gangwon, pose for a picture after the final-round match with Japan on Monday. The dedication that families of Special Olympics players have put into raising children with intellectual disabilities has been recognized by the public. By Kim Seong-ryong

As the 2013 Special Olympics World Winter Games in Pyeongchang came to an end yesterday, mothers who dedicated their lives to raising children with intellectual disabilities drew a lot of attention.

During the final round of the floor hockey match Monday, Kim Young-souk made sure not to call out her son’s name so she wouldn’t distract her son who has an intellectual disability.

The hardships for her 19-year-old son, named Choi Gyeong-jae, first began when he was 2.

Infected with tetanus, Choi went into a coma and woke up 40 days later with a large portion of his brain damaged.

Watching her son play the game joyfully, the 50-year-old mother said, “It is a great comfort for me to watch my son enjoy the game.”

Shin Sun-jae, the mother of 18-year-old hockey goalie Kang Shin-uk, was also in the stands.

Shin told the JoongAng Ilbo she neither took pride in her son, who has Down syndrome, nor was embarrassed by him before the Olympics.

“But now I am really proud of my son.”

Despite Kang’s solid performance Monday as the national team goalie, it didn’t begin so easy.

Kang used to say he was scared of the ball coming at him and tried to run away from it. But in less than 10 months, Kang was participating in the Olympics.

To another mother, Lee Du-rye, 48, the Pyeongchang Special Games weren’t a mere sporting event, but the best moment of her life. Lee told the JoongAng Ilbo her family did not realize her son had an intellectual disability until he was 10.

“I scolded him all the time for not doing his homework,” recalled Lee.

Kim, Shin and Lee all said this year’s Special Olympics will be remembered for a long time as their sons, who have long been subjected to prejudice, actively participated in the events.

“Through the Olympics I learned a lot from my son,” said Han Myeong-sun, whose son diagnosed with Down syndrome competed in a cross-country race.

“Watching his determination to finish the race despite his [mental and physical] challenges really impressed me.”

Han told the JoongAng Ilbo that through the experience with the Special Olympics, she now could withstand people’s attitudes toward her son.

She refused to use public transport for 18 years because she did not want to see people pity her son. She said “those with intellectual disabilities think and feel the same as normal people but just have difficulty expressing themselves.”

Moving stories of mothers raising children with disabilities transcend national boundaries. T.J. Will from Kansas came to Pyeongchang with her 19-year-old daughter, Helen Will, who ran in the cross-country race.

Before coming to Korea, the mother from the United States made name cards with an introductory note about her daughter so her daughter could get to know fellow players better during the event. The 49-year-old mother told the JoongAng Ilbo that to be a parent of a child with “intellectual disabilities is to become a specially chosen parent” as it involves raising a “special child.”