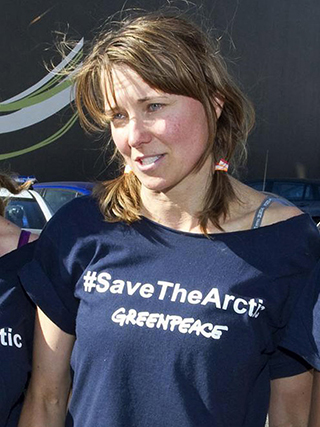 WELLINGTON, New Zealand - “Xena: Warrior Princess’’ actor Lucy Lawless says she’s won a “great victory’’ after a New Zealand judge handed her a modest sentence but declined to order costs sought by oil company Shell for her role in a protest aboard an oil-drilling ship.

Lawless and seven other Greenpeace activists were each ordered Thursday to pay 651 New Zealand dollars ($547) to a port company and complete 120 hours of community service after earlier pleading guilty to trespass charges.

Last February, Lawless and six other activists climbed a drilling tower on the Arctic-bound vessel Noble Discoverer to protest oil exploration in the Arctic. Another protester helped from the ground. Lawless spent four days atop the 174-foot tower, camping and blogging about her experiences. The action briefly delayed the ship’s voyage.

Shell Todd Oil Services, which had chartered the ship, sought about 650,000 New Zealand dollars in reparations from the protesters.

Lawyers for the activists contended that amount was excessive. In his ruling, Judge Allan Roberts said the company could pursue its claim through the civil court system.

Shell Todd declined to comment on whether it would pursue civil action. In a statement, the company said it has “always supported the efforts of law enforcement to respond to this incident and to deter such activity in the future.’’

Lawless is best known for her title role in “Xena’’ and more recently for starring in the Starz cable television series “Spartacus.’’

“I consider it a great victory that the court has struck down the reparation demand from Shell, which I think was absolutely ludicrous,’’ Lawless said. She added she was happy to clean toilets, pick up litter or do whatever else was required for community service. AP