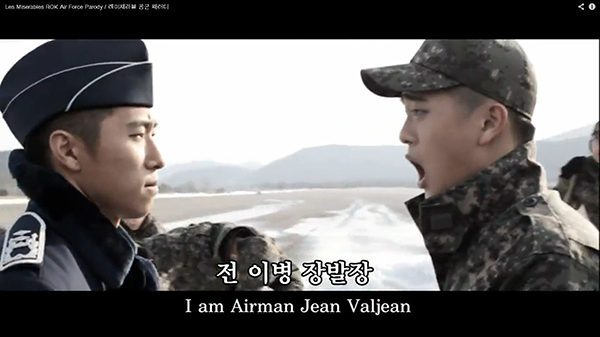 As Hollywood blockbuster “Les Miserables” heads into Oscar season with eight Academy Award nominations, the Korean Air Force’s condensed and Koreanized version of the epic, “Les Militaribles,” has hit its own jackpot.

The 13-minute movie produced by the Korean Air Force has gotten over 513,000 views on YouTube as of yesterday, a day after it was posted.

Air Force chief of staff Sung Il-hwan liked it, according to the film’s director, First Lieutenant Chung Da-hoon. He said, “Well done,” according to Chung.

Russell Crowe, who played prison guard Javert in the film, re-tweeted a link to it Wednesday.

The light-hearted satire of the tediousness of military life has six songs with lyrics adapted from the original and sung in Korean. It begins with a scene of conscripts shoveling snow and singing “Look Down,” which in the original is sung by convicts on work detail. Javert, a duty officer, tells airman Jean Valjean that his girlfriend is arriving to visit him - but he only has a few minutes to spend with her because the snow must be cleared.

The girlfriend, Cosette, waits for her boyfriend at a military visiting center and sings “I Dreamed a Dream.” (“As I take the intercity bus/crawling through the frozen roads/barely arriving at sundown/Jean Valjean is clearing snow.”) Cosette later dumps Valjean, and he and his fellow soldiers sing of the misery of enlisted life in “Red and Black.”

Snow shoveling is a common gripe among the 600,000 Korean men who are completing their compulsory military duty at any given time.

During winter, they are frequently mobilized for snow removal, especially those stationed in mountainous frontline units. Some viewers of the YouTube video left comments thanking the Air Force for a nostalgic walk down memory lane of their military days.

“I feel numbed by such a strong public reaction to the video, not to mention [both Korean and foreign] press requests for interviews,” director Chung told the Korea JoongAng Daily yesterday. “It cost us less than 1 million won [$918] to make the piece, half of which was spent on buying snacks for soldiers in the film.”

The film took a month to produce with a cast of 70 and a crew of 10, according to the Air Force, and two weeks to record. The actors who sing majored in music prior to their military service.

“The sole actress is a first lieutenant official who studied vocal music during college,” Chung said.