KAL’s tower in L.A. will be West’s tallest

KAL’s tower in L.A. will be West’s tallest 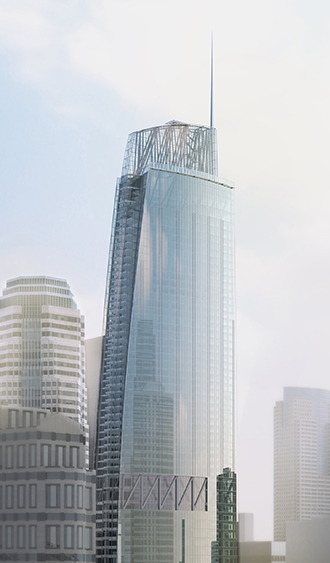 A $1 billion office-hotel tower being developed by Korean Air Lines in downtown Los Angeles will be the tallest building in the western U.S. upon its completion in four years, according to the project’s architect.

The foundation of the 1,100-foot (335-meter) tower will be poured at the end of this year, with a grand opening planned for March 2017, said Chris Martin, chief executive officer of Los Angeles-based architecture firm AC Martin Partners.

The building will rise higher than downtown’s 1,018-foot U.S. Bank Tower, currently the tallest in the U.S. West. Final renderings of the new tower were to be unveiled at a press conference yesterday.

“Downtown, along with a lot of the other commercial office centers, has relatively high vacancy rates as a result of the job losses stemming from the financial-market crisis,” Robert Kleinhenz, chief economist at the Los Angeles County Economic Development Corporation, said in a telephone interview. “But by the time this building opens it will probably be able to benefit from a recovery.”

Downtown Los Angeles, which has undergone a decade-long revitalization, has been helped by such developments as the Frank Gehry-designed Walt Disney Concert Hall on Grand Avenue, which has lured locals and tourists into the area since its 2003 opening. The Staples Center sports arena, L.A. Live entertainment complex and new restaurants and bars also have drawn people to the area.

Even with the area’s resurgence, office vacancies in downtown Los Angeles rose to 17.8 percent in the third quarter, the latest period for which figures are available, from 15.6 percent a year earlier, according to Jones Lang LaSalle. The increase was mostly from the expiration of a Wells Fargo & Company lease at 444 S. Flower St., which resulted in 190,000 square feet (17,700 square meters) coming on the market, the brokerage said in a report.

The Korean Air building will have 73 usable floors and feature a 100-foot glass pediment and spire at the top. The tower will house a 900-room, four-star hotel; 400,000 square feet of office space; and 45,100 square feet of retail space, according to AC Martin, a firm whose founder’s projects included Los Angeles City Hall, completed in 1928 and featured in such television shows and movies as “Dragnet,” “Adventures of Superman” and “L.A. Confidential.”

The skyscraper will be built on the site of the Wilshire Grand hotel, which closed in 2011 and is being demolished. The project was scaled back from plans first announced in 2009 for two towers - a 60-story office tower, and a 40-story hotel.

The new building is likely to attract financial or technology-related companies, said Chris Martin, grandson of AC Martin’s founder. There hasn’t been a new office building in downtown Los Angeles in two decades, he said.

The tower’s developers “are in discussions with a handful of possible tenants,” Martin said. “This building attracts these two types of tenants because it is located at the intersection of the financial district and the emerging entertainment district” near L.A. Live and Staples Center.

Turner Construction, based in New York, will oversee the project’s development, and Cushman & Wakefield will be the leasing agent, Korean Air said in a statement yesterday.

The Seoul-based airline also owns hotels in Korea and Hawaii.

The hotel’s lobby will be on the 70th floor, with restaurants on the 71st and an open-air pool on the 73rd.

The project is expected to create more than 11,000 construction jobs and contribute $80 million in tax revenue during development, according to its builders.

More than 1,700 permanent local jobs and $16 million in annual local revenue will be created by the tower, they said.

“The new Wilshire Grand is an investment that makes sense and we are excited to continue our relationship with this great city,” Korean Air Chairman Cho Yang-ho said in a statement.