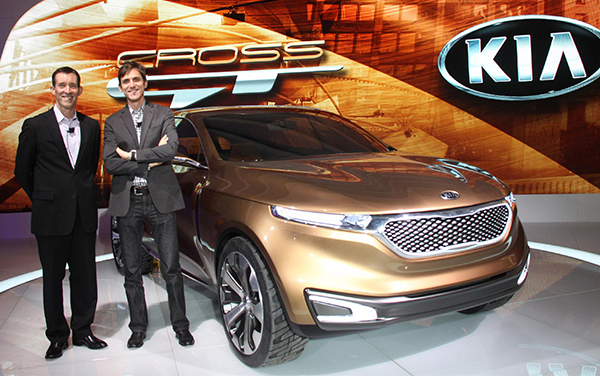 
Kia Motors, Korea’s second-largest automaker, said Friday that it has unveiled a concept car of its large hybrid crossover vehicle at the Chicago Auto Show as it looks into offering a full-size luxury crossover.

“The debut of the GT in 2011 heralded a new frontier for Kia, both from a design and a business perspective,” Peter Schreyer, Kia Motors Corporation president and global chief of design, said in a statement released by Kia.

“It beautifully illustrated to the world that the brand was ready to explore the possibility of perhaps one day offering a full-size rear-drive luxury saloon,” the president said. “The Cross GT, with its raised stance and large cargo area, allows us to envision the GT in the form of a full-size luxury crossover.”

The four-door car is powered by an efficient hybrid powertrain that utilizes a state-of-the-art 3.8-liter V6 hybrid, 8-speed automatic and torque-vectoring all-wheel-drive, according to the company.

It also said the hybrid powertrain looks to reduce the vehicle’s carbon footprint while providing the uncompromising performance that’s expected of a large, luxury crossover.

“While strictly a concept powertrain, Kia’s proven hybrid technology, combined with all-wheel drive are thought-provoking ideas that may one day find their way into a production vehicle,” Kia said in the statement.