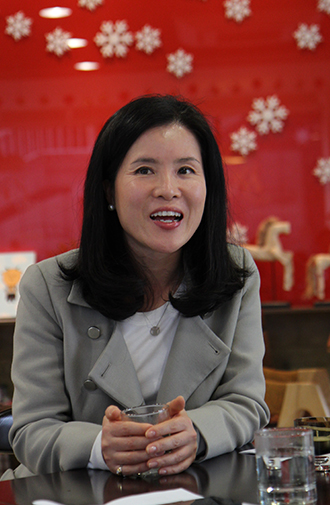 Michelle Kim, the new secretary general for Save the Children Korea, has decided to do something valuable with her 50s other than simply earning money. [JoongAng Ilbo]

Michelle Kim, the former president for Asia markets of luxurious jewelry brand Tiffany & Co, has chosen a new life as secretary general of Save the Children Korea, an internationally active non-governmental organization that promotes children’s rights.

Kim’s astonishing decision has been a big issue among NGO groups. The JoongAng Ilbo met with the newly inaugurated Kim at her office on Jan. 31.

The 51-year-old had a solid vision for her 50s. When she received a job offer from another high-quality brand company, Kim replied, “I have been thinking to take another path other than just earning money.” When the position at Save the Children became vacant, she saw it as her destiny.

Being single, she has not yet achieved her personal dream of becoming a mother with five kids, but is happy to have a job taking care of a tremendous number of children in need.

Before she became the head of the jewelry brand in 2007, she began as a mere accountant getting paid by the hour at the head office of Tiffany & Co in New York.

While people in large companies transferred their jobs frequently for higher salaries and promotions, she devoted herself to one company for 21 years.

“I just loved my work and wanted to stay where I started,” said Kim.

Kim’s family moved to Seattle when she was 16, and she attended Columbia University in New York. Doing what her parents asked, she majored in materials science and engineering, giving up her hope to study fine arts.

After happening upon an advertisement looking for an hourly employee at Tiffany & Co, she thought it would be an alternative to becoming an artist.

Since female engineers were rare at that time, she could get into any prominent company that she wanted. Instead, the woman smart enough to finish graduate school decided to live on minimum wage. Kim’s starting point was much lower than many high school graduates.

Full of passion, she could stay up all night in the office. The reference room filled with jewelry designs that may have been over 100 years old grabbed her mind.

“I could not keep my eyes off of them. The office was a treasure box for me,” Kim said.

She worked 11 years as Korean branch manager, and seven years as the head of Asia regions, excluding China and Japan. For Kim, her success did not come from money.

“I thought about what I liked rather than how much I got paid,” she said.

During the first month after changing organizations, Kim has been busy understanding her new duties.

She could feel more attached to the institution because of her past experiences in a foreign country.

Kim reminisced about her first day of school in the U.S.

“I could not speak a word in English, and the next day, the school hired a teacher just for me,” she said. She wanted to do the same for multi-ethnic families and immigrants.

The new program is designed to provide dual languages for multi-ethnic families, and help children both learn Korean and the language their mothers speak.

The organization is also dealing with a consignment business from the Ministry of Health and Welfare, and their duty is to take care of family violence and abandoned children.

“I heard that employees rush out even at 3 a.m. in emergency situations,” Kim said. She added that the workers always have bright smiles although they often experience harsh and violent moments.

Kim’s personal connections in the former company are helping her second career as well. Old colleagues of hers are encouraged to gather 100 sponsors per person for the organization.

“Everyone is a great supporter,” she said. She prefers continuous interest and support instead of one large, single donation.

“The purpose of Save the Children is not to express pity for the children,” she emphasized. Kim added that the organization is intended to eventually stand aside and watch the children grow.

Many sponsors of the Korean branch are those who previously received benefits from Save the Children USA and U.K. during the 1950-53 Korean War.

Moreover, the ratio of supporters in their 30s is pretty high. “People are now thinking beyond their own children,” Kim said with a gentle smile.