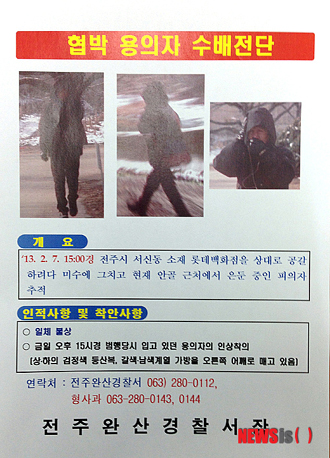 The police have placed a man who allegedly threatened to detonate a bomb at Jeonju’s Lotte Department Store in North Jeolla on the wanted list. The Hollywood-style blackmailing suspense began Thursday when the unidentified suspect called a local television station.

The suspect told a reporter at JTV to demand a store manager deliver him 10 kilograms (22 pounds) in weight of 50,000 won notes, amounting to nearly 450 million won ($411,300), according to the North Jeolla Provincial Police Agency yesterday. The suspect also claimed members of a suicide cafe Web site allegedly ran by him were “preparing something big” and told the reporter to go to Hyoja Memorial Park in Hyoja-dong. The journalist went to the park as told and witnessed a KIA Morning, a compact car, explode around 3:00 p.m.

The car was reported stolen by the owner on Monday, according to the authorities. The police have a vague description of the suspect thanks to a CCTV camera at the park and distributed his appearance on the wanted list. The suspect was wearing a black jacket and pants with his head covered with a hood.

The authorities said the suspect was at the park overseeing the demonstration. No trace of explosives was found at the store. The department store resumed operations at 6:00 p.m. Thursday following the evacuation of customers after the bomb scare. After the explosion in the park, the suspect made another call to the reporter at around 5:30 p.m. Thursday, demanding one of the female employees at the department store deliver the money to a white Matiz parked on the side of the road in front of the store.

The police sent the worker with bags of money to the vehicle.

When the worker approached the car, police apprehended the driver, who turned out be an errand worker hired by the suspect.

“The suspect made a final call at around 7:40 p.m. Thursday and said there would be no more threats,” said detective Park Sung-geun at the police agency.

“But we are closely watching whether he will make his next move as well as trying to track down on him.