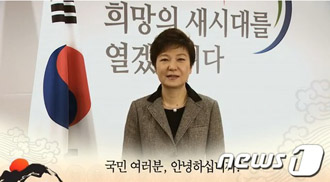 President-elect Park Geun-hye said Saturday she will make it her top priority to look after the people's lives.

Park made the remark in her Lunar New Year's message in a video uploaded to Youtube, saying she will run a government that centers around the lives of the people.

"I will be thankful if (you) will all support the incoming administration so that it can open the 'era of people's happiness,'" she said in the video message.

The incoming president also thanked and offered encouragement to industry workers, police officers, fire fighters and other military officers working on the holiday.

Park, who will be the country's first woman chief executive, won the December presidential election and is set to take office on Feb. 25.