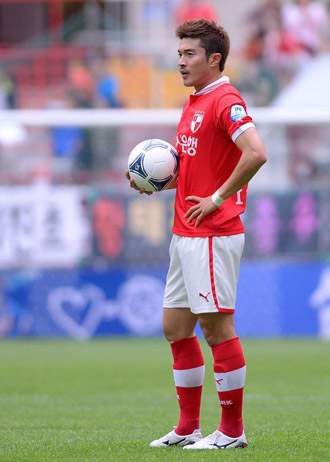 South Korean footballer Park Jong-woo left for Switzerland on Saturday to attend an International Olympic Committee (IOC) disciplinary hearing over his celebration at the London Olympics.

The IOC's Disciplinary Commission meeting is to be held in Lausanne, Switzerland on Monday to review Park's celebration when South Korea defeated Japan 2-0 in the bronze medal contest in men's football at the London Olympics.

Park held up a sign that read, in Korean, "Dokdo Is Our Territory," in support of South Korea's sovereignty over its easternmost islets, to which Japan has also laid claims. Dokdo has been a source of diplomatic tension between the two countries for years.

Park was barred from attending the medal ceremony and has not yet collected his bronze medal as the IOC's Olympic Charter prohibits any display of political statements by participating athletes, coaches and even fans during the Olympics.

"I will accurately describe what happened at the time and sincerely answer every question," Park told reporters at Incheon International Airport, South Korea's main gateway, west of Seoul.

In December, FIFA, the international governing body of football, suspended Park for two matches and fined him 3,500 Swiss francs (US$3,855) for his "unsporting behavior." The penalty was so lenient that Park wasn't even allowed to appeal.

After the hearing, the IOC will use FIFA's decision as a reference when issuing its own disciplinary ruling, according to South Korean football officials.