Cantonese artist Michael Lau, 43, has brought his collection of boys’ dolls to Seoul for the first time. Based in Hong Kong, the artist has taken his figurines - statuettes of humans, deities or animals - around the world to Los Angeles, New York, Paris, Tokyo, Beijing and Taiwan. But the Seoul exhibition will be unlike any other, the artist said.

Lau is displaying all 112 pieces of his most representative work, the “Gardner Series,” and even created a 113th “Gardener,” named “New Gardener 113 Sculpture M. David MMXIII” for his first Seoul exhibition, which kicked off on Friday.

“The Seoul exhibition will be quite different to other exhibitions that I held elsewhere. There’s more to it than just the Gardener Series, which was the case for most of the other ones. I brought about 1,000 pieces, including layouts, sketches, paintings and comic strips that I’ve collected ever since I set foot in this industry,” Lau said during a press conference held at the Sejong Center for the Performing Arts in central Seoul last week. “When visitors take a look around this exhibition, they will be able to witness my whole life in this industry. I am telling my life story through it.”

Lau grew up in a low-income family, but that didn’t stifle his passion for art. After graduating from the Design First Institute in Hong Kong, Lau made transitions in his career, all within the art industry. He worked as a show window display designer, at an advertising company and even as an oil painting restorer. He worked at a day job and made his own art at night, working until 3 or 4 in the morning. He painted on the weekends and began his own career as an artist by displaying his art in small galleries.

Figurine artist Michael Lau, 43, is often referred as the “founder of toy art.” Provided by the organizer

Now, he is known as the “founder of art toys.”

In 1998, Lau began pitching comic strips called the “Gardener Series” to a weekly Cantonese magazine called the East Touch. It wasn’t until he made the comic strip characters into figurines that he caused a sensation in the industry.

Lau’s work had a significant impact on toy manufacturers as well as street culture. His figurines focused on street culture, particularly Asian and American hip-hop and skateboarding culture.

The artist grabbed the attention of Sony Corporation and signed a contract to exclusively distribute a selection of his Gardener Series in Asia in 1999. He also did numerous collaborations with Nike, Casio and McDonalds as well as extreme sports brands Burton, DC and Airwalk.

However, Choi Yo-han, the organizer of the exhibition, says Lau’s works are unfamiliar to Koreans as the toy art industry in Korea is something of a niche genre.

“Although not many people consider figurines to be included as art, they are,” said Choi. “I believe young Koreans need to have diverse genres of art to experience. That is why I decided to invite the ‘founder’ of art toys, Michael Lau.”

Choi also said that “young Koreans will be able to witness Lau’s passion for his dream as well as his creativity and imagination through his work.”

“I hope young Koreans not only enjoy Michael Lau’s finished works, but also take a earnest look at all his sketches and paintings that he brought with him to see how he has made it this far. I want them to stop learning by rote and feel free to express their creativity.”

“The Gardener 113 Scultura. M. David MMXIII,” which is Lau’s 113th figurine in the Gardener Series, was created after being inspired by Michelangelo’s David, says Lau. The figure holds a skateboard in one hand and a sneaker in the other. This is to show the respect to the “street culture that the whole ‘Gardener Series’ embodies,” says Lau. 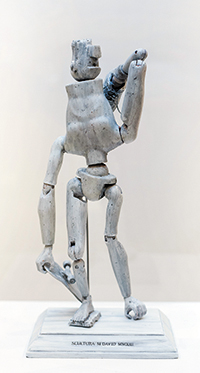 “The Gardener 113 Scultura. M. David MMXIII” is Michael Lau’s 113th figurine in the Gardener Series, which he created for the Seoul exhibition.

“I know art toys in Korea are not so big, but it is growing steadily. This exhibition is called ‘Art Toy since Michael Lau,’?” said Lau.

“I believe art toys began with Michael Lau and so, Korea will now face a new beginning of toy art.”