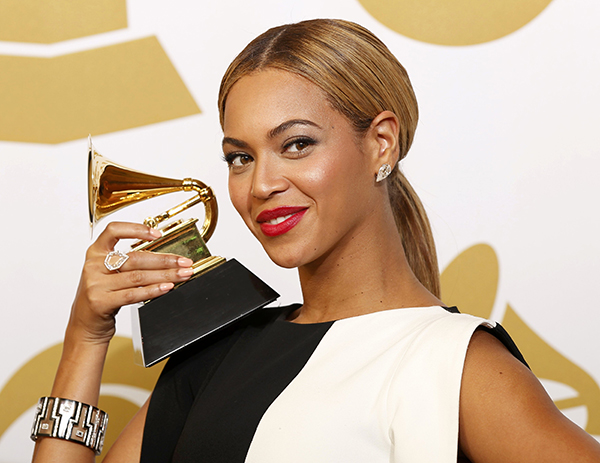 LOS ANGELES - Singer Beyonce says she wants to give her baby daughter a normal childhood with “sprinklers and .?.?. slumber parties.”

In a Vogue magazine interview released on Monday she also teased her next, as yet untitled, album saying the music is “a lot more sensual .?.?. empowering” thanks to motherhood.

The Grammy-winning singer, 31, who is married to rapper Jay-Z, took a year off her music career to care for her first child, Blue Ivy Carter, who was born in January 2012.

“At some point it’s very important to me that my daughter is able to experience life and run through the sprinklers and have slumber parties and trust and live and do all the things that any child should be able to do .?.?. School visits and lemonade stands and all that stuff. It’s very important for me,” she told Vogue in an interview for its March issue.

The singer, who is making a comeback with a world tour starting in April, talked about bringing her daughter to work, saying, “She’s my road dog. She’s my homey, my best friend.”

The Vogue interview was conducted in late 2012 before Beyonce’s controversial lip-synced performance of “The Star-Spangled Banner” at President Barack Obama’s inauguration in January.

Two weeks later she silenced her critics with a live performance at the Super Bowl halftime show.

Beyonce called media gossip last year that she had faked her pregnancy “very odd” and spoke in detail about giving birth for the first time.

“I felt like when I was having contractions, I envisioned my child pushing through a very heavy door. And I imagined this tiny infant doing all the work, so I couldn’t think about my own pain ... We were talking. I know it sounds crazy, but I felt a communication,” she told Vogue. Reuters