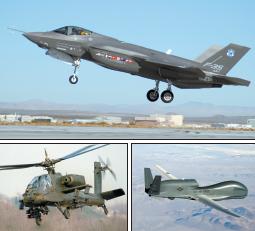 For decades, “Made in U.S.A.” was the only label that counted when Korea went shopping for military equipment.

Military and defense industry sources said it was a deliberate sign of a change in Korea’s procurement patterns, which has been heavily concentrated on American weaponry. Expectations are high that in the incoming Park Geun-hye administration, which is scheduled to invest more than 70 trillion won ($64 billion) in major defense projects, the price tags will become more important than either the technology or the country of origin. The new president has made clear that her priority in spending is shifting from swords to ploughshares, or welfare programs.

On Jan. 15, the Defense Acquisition Program Administration announced it will buy eight AW159 Wildcat helicopters from British-Italian manufacturer AgustaWestland in a new maritime helicopter acquisition project, beating out the MH-60R Seahawk made by U.S. rival Sikorsky. About 600 billion won will be invested in the program, which is meant to upgrade South Korea’s capabilities against the North’s submarines.

Before the announcement, speculation was high that the American model would be selected. But sources at the state-controlled defense agency said Sikorsky’s prices were simply too high.

“All the bidders met the requirements for operational capabilities,” said Baek Yoon-hyeong, spokesman of the Defense Acquisition Program Administration. “So this time, the selection was based on the price factor.”

Military officials and arms industry experts said the capabilities of the Seahawks are clearly more advanced than that of the Wildcats. The decision was, therefore, a clear signal that Korea could be stepping away from its habitual purchase of U.S. arms - just as several very large procurement projects are on the horizon.

“It’s a message that when the requirements of operational capabilities are all met, Seoul won’t necessarily choose expensive American weapons systems,” a defense industry source told the JoongAng Sunday. “And it could be a signal that Korea wants to redefine its stance on massive projects aggressively pursued by U.S. builders such as the next-generation fighter jet project.”

Korea is one of the largest arms buyers in the world. According to a March 2012 report by the Stockholm International Peace Research Institute, Korea was the world’s second-largest recipient of arms, accounting for 6 percent of global arms imports from 2007 to 2011. Only India was ahead of Korea, and Pakistan and China followed.

That translates into Korea being one of the largest buyers of U.S. arms. According to the Stockholm institute’s data, Korea purchases 74 percent of its imported arms from the United States. From 2005 to 2009, Korea spent a total of $6.53 billion to buy American-built weaponry. In 2010, 982.2 billion won of Korea’s 1.24 trillion won procurement budget was spent on American armaments.

Other statistics back up the theme. According to the Board of Audit and Inspection, Korea spent $19.3 billion from 1974 to 2010 to buy arms through the U.S. government-controlled Foreign Military Sales program, the sixth-largest buyer after Saudi Arabia, Egypt, Israel, Taiwan and Australia.

Representative Baek Kun-ki of the Democratic United Party, a former general who served as a security adviser to DUP presidential candidate Moon Jae-in during last year’s campaign, said the selection of the European helicopter was an important step.

“When the requirements for operational capabilities are satisfied, we need to think about the economics,” said Baek. “It is also important to diversify our arms systems.”

The question is whether that purchase is a precursor to others down the line under the Park Geun-hye administration. While no major decisions have been made yet, and campaign promises sometimes yield to hard realities on the ground, speculation is high that defense expenditures by the Park administration could be lowered because of her promise to boost welfare spending.

The defense budget was already attacked with the trimming scissors when the National Assembly approved the 2013 budget in January. The ruling and opposition parties approved a defense budget of 34.3 trillion won, 3.8 percent higher than 2012 but 328.7 billion won lower than originally requested by the outgoing Lee Myung-bak government. The cuts were largely made in procurement projects.

Three companies are competing on the bid, including two American ones. The competition has narrowed down to the F-35 Joint Strike Fighter by Lockheed Martin, the F-15 SE Silent Eagle by Boeing and the Eurofighter by Europe’s multinational defense group EADS. The project, originally scheduled to be concluded last year, was postponed to the Park administration.

While all three jets have mighty abilities, a former Air Force general told the JoongAng Sunday recently that the F-35’s special stealth function would be critical to deterring the North’s nuclear and missile capabilities. A stealth function, however, is not a requirement in the bidding and is not available on the other two jets.

Prices are particularly important in the Park administration because she plans to increase the welfare budget by 27 trillion won annually during her term. The defense budget is a likely place to cut.

Price tags will be important in other procurement projects, too. Since 2004, 48 out of 72 Apache attack helicopters of the U.S. 2nd Infantry Division along the western inter-Korean border have gradually been withdrawn, and Korea wants to purchase 36 new aircraft to fill the gap.

“The Army wanted this procurement project for 20 years,” said a former lieutenant colonel who once headed a helicopter squadron. “But it was reportedly postponed.”

This time, the Army was allocated 1.86 trillion won to purchase new attack helicopters. But the price for 36 Boeing Apaches is about 3 trillion won. Rival models such as the AH-1Z or AgustaWestland’s T-129 will also cost about 2.5 trillion won.

Another procurement project for which the price could become a deal-breaker is the acquisition of high-altitude unmanned aerial vehicles. In preparation of the scheduled dismantlement of the Korea-U.S. Combined Forces Command in 2015, Korea seeks to upgrade its intelligence gathering capabilities by purchasing the next-generation Global Hawks.

While Seoul plans to spend 480 billion won on the project, Washington puts the price at triple that amount. According to the Pentagon-affiliated Defense Security Cooperation Agency at the end of last year, the price tag for four RQ-4 Global Hawks was $1.2 billion.

To pressure the U.S., Noh Dae-lae, head of the Defense Acquisition Program Administration, said last year that Korea has no intention to continue the project because “Global Hawks are too expensive while operations conditions are too strict.”

Another longtime dream of the Air Force is midair refueling aircraft. The project was turned down by the Lee Myung-bak administration, but Air Force sources said it is an economical option to overcome the forthcoming decline in air-combat capabilities.

“Aerial refueling tankers improve the operational capabilities of a fighter jet by up to 30 percent,” a source from a European defense company told the JoongAng Ilbo. According to him, midair refueling could give an effect of increasing Korea’s fleet of 350 fighter jets by 100 units.

Once again, the issue is the price. As of now, the Air Force wants four aerial tankers that would cost around 1.4 trillion won.

The fates of all major procurement projects are linked to the expected defense budget cuts of the Park administration, which has the military worried.

“When the systems meet the requirements of operational conditions, there is nothing wrong with buying the cheapest ones,” said a retired Air Force chief of staff. “But down the line we will see a trend of buying cheaper but less capable armaments.”

“When you think about a long term future, it’s better to invest in the advanced arms as long as they don’t come with rip-off prices,” another senior military official said.