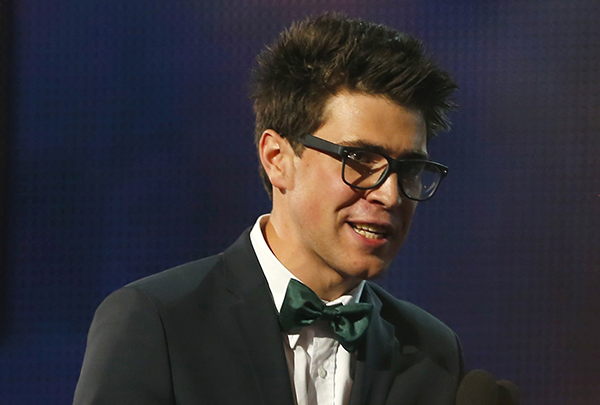 Vitalli Sediuk spoke briefly before Adele took the stage and received the telecast’s first Grammy Award. He was shooed away by presenter Jennifer Lopez and video of the ceremony shows him walking off the stage while Adele delivered her acceptance speech, crediting Lopez as a “good luck charm.’’

Jail records show Sediuk spent the next several hours in custody and was ordered to appear for a March 4 court date. He told Hollywood Reporter, which first reported his arrest, that he did not have a ticket to the show and took musician Adam Levine’s seat before going on stage.

Sediuk’s intrusion came after Los Angeles police increased security at the Grammys due to an ongoing manhunt for a rogue ex-officer targeting police and their families.

Police said they had no details on Sediuk’s arrest, other than it was made by private security at the show.

Publicists for the Grammy Awards did not return e-mails Tuesday seeking comment on the incident.

Sediuk, 24, has gained notoriety for other stunts involving celebrities. Will Smith slapped the 24-year-old last year after attempting to kiss him on the red carpet of the Moscow premiere of “Men in Black III.’’ Madonna received a bouquet of hydrangeas from Sediuk at the 2011 Venice Film Festival and promptly stashed them under a table, declaring, “I absolutely loathe hydrangeas.’’

Sediuk was not immediately available for an interview Tuesday.

“I’m not a crazy guy,’’ Sediuk told the magazine. “I just think differently.’’

He was working for the Ukrainian television channel 1+1 when he was slapped by Smith in May, and told Hollywood Reporter that his station wasn’t credentialed for Sunday’s show. He claims he followed Katy Perry into the show and that security never asked him for a ticket.

He said he didn’t plan on going onstage, but went up after hearing Adele’s name after she won the award for Best Pop Solo Performance. He was pulled away from the microphone by Lopez, who appeared unfazed and Adele delivered her acceptance speech without further incident. AP