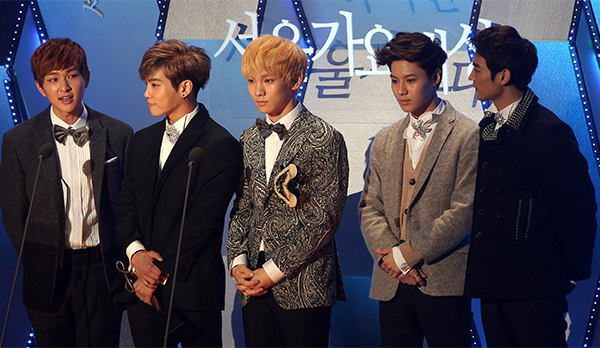 
SHINee is gearing itself up for a comeback. Today the five-member boy band will hold a preview event for its upcoming third album.

The showcase to take place at Olympus Hall in Samseong-dong, southern Seoul, will consist of the band talking about the production process as well as letting about 100 fans hear songs contained on the album.

Then on Feb. 22, the group will take to the stage with the album’s title track “Dream Girl” on Mnet “Countdown.” After its cable television performance, the group will appear on KBS’ “Music Bank” on Feb. 23 and MBC’s “Music Core” on Feb. 24.

In December, SHINee performed in Singapore, where more than 10,000 fans turned up for the “SHINee World II” show.

Hits like “Oxygen,” “Ring Ding Dong” and “Sherlock” were sung as well as solos by the band members. In all, more than 29 performances took place.

In return, fans treated the group to synchronized songs of cheer in Korean as well as singing along to the songs in Korean. By Carla Sunwoo