A week ahead of the 10-year anniversary of the tragic Daegu subway fire which claimed 192 lives on Feb. 18, 2003, Lee Dong-woo, head of Daegu disaster’s support committee, sheds tears on Monday at the site of the disaster, Jungangno Station of the Daegu Metropolitan Subway. By Gong Jeong-sik

Though Monday marks the 10-year anniversary of the tragic Daegu subway fire disaster, in which some 192 people were killed and 151 injured, many of those surviving are still haunted by mental and physical trauma.

One survivor, Kwak Si-hwan, 47, a professional chef, was on the train when an arsonist lit it on fire at the Jungangno Station of the Daegu Metropolitan Subway on Feb. 18, 2003.

Kwak says he can no longer cook because he is afraid of flames.

To this day, he suffers from pain, coughing and respiratory issues and regularly seeks hospital treatment. 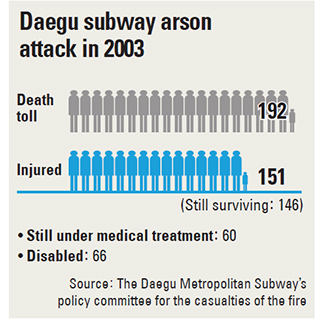 Kwak does not spend time anywhere indoors that is crowded or dusty.

His voice is permanently hoarse because at the time of the fire, he inhaled too much toxic gas, burning his larynx. He had two surgeries and has been deemed as disabled.

“I received treatment in the hospital and tried all home remedies supposed to be good for the throat but there is very little difference,” said Kwak. “I never thought the aftereffects will last this long.”

The arsonist, Kim Dae-han, an unemployed former taxi driver, 56-years-old at that time, was sentenced to life in prison in August 2003 before dying in prison one year later in August 2004.

He lit flammable liquids on fire with a lighter in one of the cars of the subway, on the morning of Feb. 18, which in turn spread to other cars and released strong poisonous gas.

Subway workers and officials at that time were criticized for responding too slowly to the crisis.

Of those 151 injured in the subway fire, excluding five who have died, some 40 percent still struggle with side effects from the fire and have undergone surgery, according to the Daegu Metropolitan Subway’s policy committee for the casualties of the fire and their family.

A third of these people received multiple surgeries for the narrowing of the larynx, like Kwak, or damaged vocal cords. Other casualties suffer from respiratory issues and inflammation of the neck and face.

The committee further said that 66 survivors have been deemed disabled, including visual impairment and mental trauma. Of these people, 60 casualties suffer from oral damage.

Song Chang-jun, 47, who also had his larynx burned, said, “My throat always feels prickly and the coughing and mucus never stops, so it is difficult even to have a conversation.”

When he gets up from sleep, he cannot speak immediately and has to cough a lot and drink water before he can talk because of the hardening of the mucus membrane due to the fire.

A woman surnamed Lee, who had been a 17-year-old high school student at the time of the fire, had four surgeries since 2009 in order to repair her damaged vocal cords.

But many victims still have not been treated. Because of economic constraints, some simply take medicine to alleviate the pain because they cannot afford a surgery that can cost up to 2.5 million won ($2,289) per surgery. And sometimes, they are still not be cured.

Lee Dong-woo, the head of the Daegu disaster’s casualties support committee, said, “At that time, the casualties received a fee to treat the damages to the respiratory system and from psychological trauma, but as 10 years has passed, there is a need to check if other illnesses developed.”

“When the delicate mucus membrane of the vocal cords gets burned, the side effects last a long time and can advance into cancer,” said Dr. Choi Hong-sik of the Gangnam Severance Hospital, who is in charge of treatment of the Daegu disaster patients. “Because it was a large disaster, there is a need for the government to continuously examine [the casualties’] situation.”