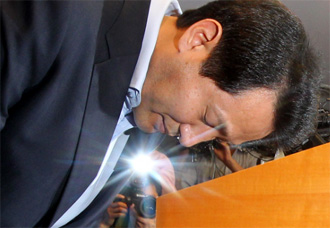 The special enquiry committee into the local governments’ tax spending, headed by attorney Park Young-soo, the committee chief, held a press conference at the association’s office in Yeoksam-dong, southern Seoul, yesterday and asked prosecutors to investigate former Mayor Oh for dereliction of duty.

The lawyers said they have been inquiring into whether the Seoul city government has wasted taxpayers’ money since August of last year.

They concluded that Oh has wasted citizens’ tax money because he did not carefully review the feasibility of the Floating Islands project and made an inappropriate contract with a private company.

The three artifical Floating Islands in Banpo, southern Seoul, were completed in 2011 with 139.2 billion won ($130 million) in funds from private investors.

The project was carried out by Flossom, an urban development company.

The city government guaranteed Flossom ownership of the islands for 30 years in return for the investment. Ownership was supposed to go to the city afterward.

The islands were inaugurated in June 2011 with a high-profile Fendi fashion show but have been neglected since then as they failed to find a subcontractor to manage the islands.

“The contract is unfair because the city government has to pay all the money that Flossom invested if they go bankrupt when the project wasn’t even approved by the Seoul Metropolitan Council. It is also inappropriate that SH Corporation has invested in a private fund inducement project that it is not allowed and it also weakened the financial soundness of the corporation.”

The inquiry committee sent a written request for an investigation to the Seoul Central District Prosecutors’ Office.

The special committee said they decided to ask prosecutors to launch an investigation as they don’t have investigation rights for those officials who were in charge of the project.

They requested prosecutors investigate former Mayor Oh and 11 officials from the Hangang (or Han River) Project Headquarters as well as SH Corporation.