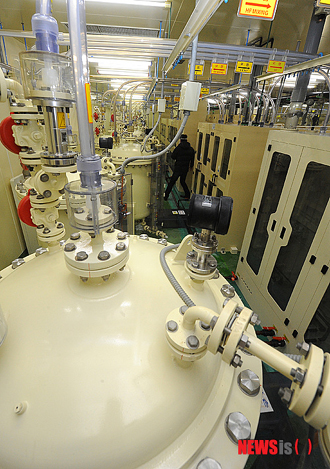 Hydrofluoric acid was discharged from a Samsung Electronics Company chip plant into the environment following a fatal leak last month, police said yesterday, in contrast to the company’s earlier announcement that the leak had been contained.

Up to 10 liters of diluted hydrofluoric acid, a colorless poison that can damage the lungs, bones and nervous system, leaked from a pipe at the main semiconductor plant in Hwaseong, 60 kilometers (37 miles) south of Seoul, on Jan. 28, killing one worker and injuring four others.

“Hydrofluoric acid has been leaked outside of the chip plant,” Song Byung-sun of the Gyeonggi Provincial Police Agency said.

The world’s largest memory chip marker released a statement following the incident saying there was no possibility of fatal gas being released from the plant and that the situation was contained.

Police said they are reviewing whether Samsung violated the law as there is a clause in the Clean Air Conservation Act that allows discharging such contaminated material in emergency situations.

Meanwhile, a special probe by the Ministry of Environment and the provincial government of Gyeonggi has been launched, a ministry official said yesterday.

The investigation will focus on whether Samsung properly managed and monitored chemical substances, the official said, adding that the probe will cover the entire Hwaseong plant.