Jin believes there’s no ‘I’ in team at the WBC

Jin believes there’s no ‘I’ in team at the WBC 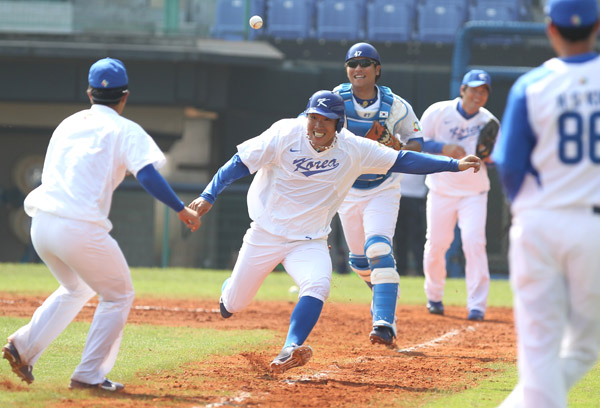 Training in Taiwan over the past five days, Team Korea has been working on its teamwork, which it believes will separate it from the 15 other countries competing in the World Baseball Classic next month.

If there is anyone on the team feeling similar pressure as manager Ryu Joong-il, it would be Jin Kab-yong, Ryu’s pupil that was selected as captain of the national team.

Jin, 38, is the oldest on the 28-member team, and in this seniority-based country, age may have been a significant factor in him becoming captain.

But that doesn’t mean he lacks merit. In fact, he has been the captain of the Samsung Lions since 2004, the longest-serving captain in franchise history. 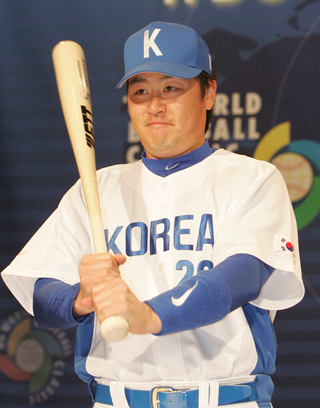 He stressed teamwork was crucial to the Lions’ Korean Series victories in 2011 and last year, and that it will help Korea when it seeks a third straight semifinal run in the now quadrennial international baseball competition.

“Baseball is not an individual sport, but a group sport led by teamwork,” he told reporters, while practicing for the 2013 WBC. “If we muster our power together, we will be able to have a good result.”

He has a growing list of experience in international competition, with his national team performance going as far back as the 1996 Atlanta Olympics.

At the Beijing Olympics, Korea edged out Cuba 3-2 in the final, and Jin provided crucial help. Kang Min-ho replaced him as the catcher in the final, as Jin was injured in a previous game, but Kang was ordered out after he confronted the umpire over a call, and Jin came in to replace Kang.

This was when Cuba began catching up with Korea, loading the bases with one out in the ninth. Jin led relief pitcher Chong Tae-hyon to pitch three solid balls to retire the batter to a tournament-ending double play.

He was the starting catcher for Korea during the Beijing Olympics while Kang was his backup. He will switch roles with Kang this time.

Baseball commentator Ha Il-sung said that Jin could play no less significant role for the team than star players such as slugger Lee Dae-ho.

“Among the key players, the most visible player is Lee Dae-ho, but Jin Kab-yong will have an important role behind the scenes,” he said. “He has ample international experience and quickly figures out the strike zones of each umpire.”

Jin said that his roles have been reduced compared with the past as the team has many other good players.

“In the past, the players were nervous when they made the national team,” he said. “But, these days, they have a lot of experience and have produced good results.

“They appear to be relaxed, at least on the surface, but I get the impression that the players have prepared themselves well. That means they also feel pressure about the result. I think they have proper tension and that’s good.”

Jin said there will be no slacking on his part.

“I will keep the fighting spirit, thinking it will be the last time that I play as a national representative,” he said.