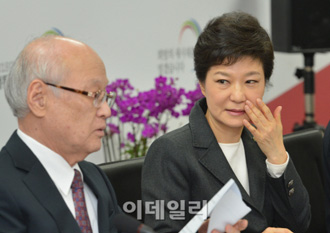 As the National Assembly remained deadlocked over President-elect Park Geun-hye’s government restructuring plan, the new administration appeared to have to begin its term with the outgoing cabinet still in place.

With the inauguration slated for Monday, Park made public all the names of her prime minister and minister nominees as of Sunday. The National Assembly, however, needs to approve a package of bills to restructure the government to allow the new cabinet to start working.

After the ruling Saenuri Party and the main opposition Democratic United Party failed to strike a deal on Sunday, the voting session scheduled for yesterday to approve the bills was canceled.

The two sides mainly disagree about Park’s plan to give her new ministry of future planning and science the role of promoting the broadcasting industry. As of now, the Korea Communications Commission is in charge of the job.

While the Saenuri Party is adamant about keeping Park’s proposal, the DUP said the broadcasting policy-making should be handled by the commission, not by the new ministry, to ensure the independence and fairness of broadcasters.

Unless the legislature opens a voting session this week and passes the bills, Park will be forced to start her presidency with the cabinet of the Lee Myung-bak administration.

Confirmation hearings by lawmakers for the nominees for the cabinet members are mandatory, and Park won’t be able to appoint two of her 18 cabinet members because they were to head ministries that currently do not exist.

Park wants to create the ministry on future planning and science and bring back the maritime affairs ministry through the government restructuring.

It takes up to 20 days for the legislature to go through a confirmation hearing process, thus early March will be the earliest possible date for Park to formally work with her fully-formed cabinet.

Jung Hong-won, the nominee for prime minister, is the only candidate whose confirmation hearing can take place before Park’s inauguration and the legislature scheduled the sessions for tomorrow and Thursday.

It could also take longer because the DUP, enraged by Park’s decision to make public all the nominees even before the National Assembly’s passage of the government restructuring bills, vowed to grill the candidates harshly.

It won’t be the first time for a new president to begin a term with a departing cabinet.

As two nominees were thrown out after the confirmation hearings, President Lee managed to fill the vacancies in his cabinet on March 13.

Thus, Lee’s first cabinet meeting on Feb. 27, 2008 was with the cabinet of his predecessor Roh Moo-hyun, and Lee’s cabinet held their first meeting on March 19, 2008.

The ruling party yesterday held a meeting of its lawmakers and discussed the situation.

“The time has come for us to act,” Representative Lee Hahn-koo, Saenuri floor leader, was quoted as saying by the Yonhap News Agency. “We can only open the era of the people’s happiness when Park can start work as soon as possible.”

While the ruling party continued to urge the DUP to support Park’s government restructuring plan, the main opposition party yesterday criticized the president-elect for having failed to create a competent cabinet.

“A closer look into the cabinet nominees showed that Park wants to build a strong Blue House and a weak cabinet,” said Representative Yun Kwan-seok, a DUP spokesman.

Representative Lee Yong-sup also said yesterday that Park’s pick for the ministers was far from her pledge for balanced appointments.

“The people would want to know if Park took regional balance into consideration,” Lee said. “She showed a high-handed attitude as though she could provide some statistics when making the announcements. But there was no mention of it, and the people were made to find out information if they wanted to know.

“The appointments were far from her promise of grand national unity to overcome regionalism and gender barriers,” he said. “There are 18 cabinet members including the prime minister, but only two of them were from the Jeolla region. Chin Young, welfare minister nominee, and Phang Han-nam, labor minister nominee, are the two, but they both left their hometowns when they were young so they were Jeolla natives only by title.”

Lee also said he expected Park to give more opportunities to women, because she is the first woman president of the country, but only two of her cabinet nominees were women. “I think that was very regretful,” he said.

Of the 18 nominees for the Park cabinet, 50 percent were natives of the capital area, including seven from Seoul. Five were from Gyeongsang, two were from Jeolla and two from Chungcheong.

DUP Representative Moon Byung-ho criticized Park yesterday for having failed to communicate with the people and promote unity with new politics.

“Although Park said she valued the professional competence of the nominees, the key problems are her decisions to ignore the people’s life, politics and common sense,” Moon said. “Elite bureaucrats who passed the state exams cannot understand the reality of people’s lives. It’s also hard to expect economic democratization and a solution to our livelihood crisis from a [finance] minister who is a conservative and staunch believer in market fundamentalism.”