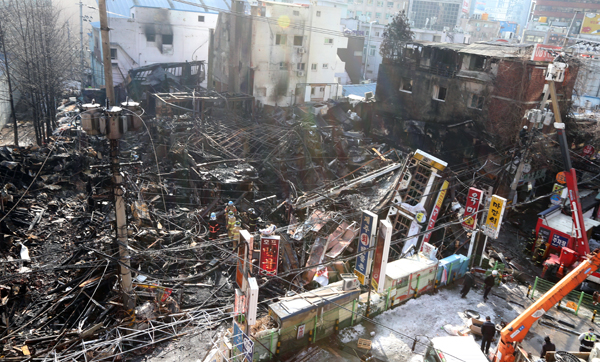 Firefighters yesterday morning work to fully quench a fire that broke out in a restaurant in an alley of Insa-dong on Sunday evening, burning down six buildings and dozens of stores. By Kang Jung-hyun


A fire broke out in a restaurant in an alley of Insa-dong late Sunday evening, burning down six buildings and dozens of stores.

At 8:25 p.m. on Sunday, flames shot up from a three-story wooden building in Insa-dong, central Seoul.

Witnesses in the area said, “We heard two or three huge explosions and then a fire erupted immediately.”

The fire started in the area between exit No. 3 of Jonggak Station of subway line No. 1 and a food alley in Insa-dong, a few blocks behind the Jongno Tower building.

Due to the fire, 23 stores in six buildings, including the three-story building, were destroyed in 90 minutes. Seven citizens were sent to Inje University Seoul Paik Hospital in Uljiro, central Seoul, for smoke inhalation.

The fire authorities said that there were no human casualties as of press time yesterday, but they are still checking the scene for bodies.

“When the fire broke out, about 50 customers were in the restaurant that is on the first floor of the three-story building,” said Oh Ji-hyung, chief investigator of the Jongno Police Precinct.

Oh added that the inspection of the scene could continue until tomorrow because the scale of the fire is quite large.

The police said that the flames in the three-story building were extinguished around 9:30 p.m. on Sunday, but the building still collapsed.

“The fire was difficult to extinguish because there are too many buildings in the narrow streets and many of them are made out of wood,” a spokesman for the fire authorities said.

They currently assume that the fire originated from gas containers or electric transformers in the building.

“We found four burned gas containers and three burned electric transformers in the building,” the spokesman of the fire authorities added.

Experts said areas in Jung and Jongno districts as well as some areas that house traditional markets are vulnerable to fires because there are many wooden buildings, and too many buildings are packed tightly in the narrow streets.

“We had considered forcing building owners to install sprinkler systems in the past but didn’t, because many of the buildings are too old for refurbishing and it’s too expensive for the owners,” a spokesman for the Seoul Metropolitan Fire and Disaster Headquarters told the JoongAng Ilbo.