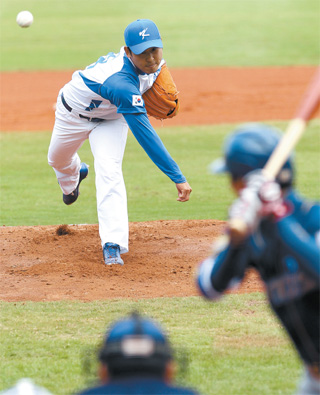 DOULIOU CITY, Taiwan - The Korean national baseball team wasted strong pitching performances as it fell to a pro club in a practice match Tuesday ahead of the World Baseball Classic (WBC).

Korean starter Yoon Suk-min threw three scoreless innings against the NC Dinos of the Korea Baseball Organization (KBO) at Douliou Baseball Stadium here in Taiwan, as the country prepares for the March 2-19 WBC. But Yoon and five other pitchers received no support from their offense, as the Dinos edged the national team 1-0.

The Dinos will play their first KBO season in 2013.

Ryu Joong-il, the national team manager, has repeatedly said results in these practice matches aren’t important, and that he wants to give as many players as possible a chance to get into game shape and prove themselves worthy of a spot in the starting lineup.

The national team and the Dinos will face off again at the same stadium today.

Yoon, a right-hander for the KBO club Kia Tigers, scattered five hits in his three innings and struck out two batters. After two key starting pitchers, Ryu Hyun-jin of the Los Angeles Dodgers and Kim Kwang-hyun of the SK Wyverns, were left off the national team, Yoon has been regarded as the potential No. 1 starter for South Korea.

Yoon escaped a no-out, bases-loaded jam in the third by retiring three straight batters. He reached 146 kilometers per hour (91 miles per hour) with his fastball and mixed in his slider and changeup.

Seo Jae-weong, Yoon’s Kia teammate and a former Major League Baseball (MLB) pitcher, threw two scoreless innings in relief. Son Seung-lak of the Nexen Heroes gave up the only run of the game in his inning of work.

From the seventh inning and on, Chong Tae-hyon, Park Hee-soo and Oh Seung-hwan each threw a scoreless frame. Chong, a submarine pitcher for the Lotte Giants, struck out the side.

Hitters looked out of sync. Five hitters, including the Orix Buffaloes’ slugger Lee Dae-ho, each had a hit, while the rest of the lineup went hitless.

They blew a one-out, bases-loaded chance in the 8th, with Lee Jin-young and Lee Seung-yeop, two national team veterans, only managed groundouts.

After the game, national team manager Ryu Joong-il said he was satisfied with his pitchers’ performances.

“I had been most concerned about our pitchers, but they looked pretty good today,” he said. “Yoon Suk-min had good command of his breaking pitches. His fastballs were a little high, but he was fine otherwise.”

Ryu said he wasn’t too worried about the hitters’ struggles at the plate, especially since it was the team’s first live game in its WBC training camp.

“I think they had trouble with their timing on breaking balls,” Ryu observed. “But it was their first game and I expected them to have some difficulties. We have five more practice matches and they can work themselves into shape over time.”

Korea will open its WBC on March 2 against the Netherlands in Taichung, north of Douliou, followed by Australia on March 4 and Taiwan on March 5. Yonhap